A 45 year-old woman presented with 4 hours of lower back pain, after a fall from standing. She did not report a loss of consciousness, and did not injure her head. She had no neurological deficits, nor bladder of bowel dysfunction. She denied any chest pain or dyspnea. A standard 12 lead EKG was obtained shortly after arrival, which was concerning for ST elevation in a lateral wall distribution (Lead I and AVL, and V4-V6).

Her past medical history was only significant for a recent diagnosis of a metastatic, high-grade undifferentiated pleomorphic sarcoma (from a biopsy performed on a mass over her right flank). She had no family history of malignancies, diabetes or early onset CAD. Her home medications consisted of Morphine ER, Tylenol, Zofran, Dexamethasone and Docusate, and she had recently undergone a single cycle of chemotherapy (Gemcitabine and Docetaxel, as well as Denosumab). She had no history of coronary disease, nor risk factors for the early development of CAD. She was obese, and appeared to be in no distress. Heart rate was 89, Blood Pressure 107/68mmHg. Palpation over T12 was tender, and her lower extremities were neurologically intact. Her lungs were clear, and with oxygen saturations of 96% on room air. She had good volume peripheral pulses, with a regular rhythm. A systolic murmur was noted across the whole precordium; no JVD or pedal edema were present; a Port-A-Cath device was present in the right upper chest.

Imaging confirmed an acute fracture of T12. She was mildly anemic with a significant leukocytosis (Hemoglobin 9.7, Leukocyte count 24). Her renal and hepatic chemistries were normal, except for hypocalcemia (7.6) and hypophosphatemia (1.0). Troponin levels were undetectable. Bedside transthoracic echocardiography was performed and a mass was visualized in the left ventricular wall (without associated wall motion abnormalities).

Hospitalists frequently encounter EKGs with changes suggestive of ischemia, but not all of these EKGs are caused by coronary occlusion. Metastatic disease affecting the myocardium may mimic STEMI, and should be considered in the differential of patients with malignancies and who have no clinical symptoms of acute myocardial infarction and who have normal cardiac biomarkers. When present, intracardiac malignancies commonly cause ECG abnormalities, although these are typically non-specific changes. The clinical presentation is clinically variable, with signs and symptoms influenced by the location of the lesion, and the extent of infiltration into surrounding tissue and chambers.

Metastatic tumors are 20-40x more common than primary myocardial tumors, and may originate for several primary sites (most commonly melanoma, breast cancer, lung cancer, and lymphoma). Sarcomas are the most common malignant primary cardiac tumors. Imaging modalities that can be useful in workup of metastatic myocardial disease include echocardiography, CT imaging, Cardiac MRI, and FDG-PET scanning.

Although cardiac malignancies are rare, review of abnormal EKGs is routine for Hospitalists. Recognition of this particular MI-mimic may become increasing relevant in the current era of increased clinical volumes and increased hospitalist involvement in the management of patients with advanced, widely metastatic disease. 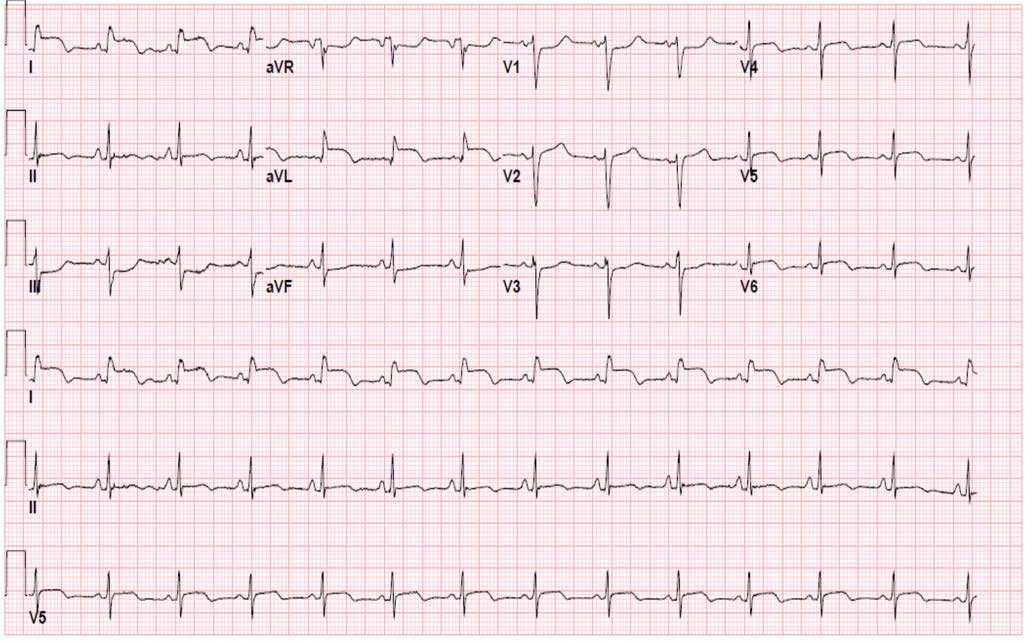