Case Presentation: A 52-year-old man presented with bilateral foot pain worsening on the left preventing him from ambulating. He recalled developing frostbite of all ten toes 4-5 months prior to admission, when at that time, he was admitted to a local hospital and underwent right transmetatarsal amputation but did not follow-up with his wound care. The patient was homeless and dwelled in shelters and abandoned houses. He reported developing erythema, tenderness and swelling of his left foot; however, he did not seek medical attention because he otherwise felt “ok.” He reported seeing maggots on the left foot but stated that “the maggots are fine, they are cleaning it out.” He denied fever, chills, nausea, vomiting, or lightheadedness. On physical examination, the patient’s vital signs were normal except for mild tachycardia, which immediately resolved with one bolus of intravenous normal saline. His left foot (Figures 1 and 2) revealed severe skin ulceration extending to the mid-foot, exposing all phalangeal bones, and many colonies of maggots. There was surrounding erythema, swelling, tenderness and malodor, but otherwise clean margins with no necrotic tissue or purulence. Left peripheral pulses were normal at the dorsal pedis. Laboratory tests revealed no leukocytosis, lactic acidosis, and negative serial blood cultures.  Imaging revealed acute on chronic osteomyelitis of left foot. The patient underwent an uncomplicated left below knee amputation and revision of previous right transmetatarsal amputation. He was discharged to rehabilitation but has not adhered to outpatient wound follow-up.

Discussion: Usually seen in developing countries, wound myiasis is an infestation by the larvae (maggots) of the fly species Diptera. Feeding on the host’s dead or living tissue, maggots have been recognized to aid in debridement and wound healing. Sometimes referred to as “the world’s smallest surgeons,” maggots secrete digestive enzymes that dissolve necrotic tissue, disinfect the wound, and release growth factors assisting in wound healing. Once routinely used for wound debridement, maggot therapy declined with the advent of antibiotics, but is being re-evaluated with the advent of antimicrobial resistance. The maggots in this case were believed to have contained the wound infection, resulting in the patient’s lack of systemic signs or symptoms of sepsis.

Conclusions: This unusual case illustrates the unique abilities of maggots to debride and contain severe bone and soft tissue infections. 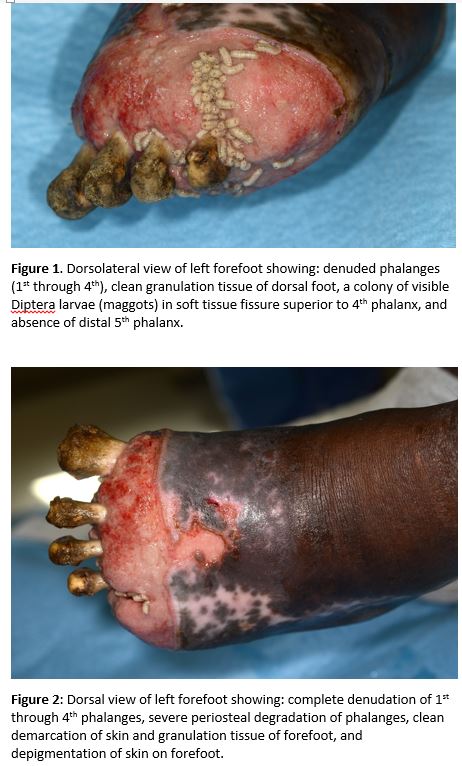