Case Presentation: A 34 year old Filipino male with a past medical history of recently diagnosed Human Immunodeficiency Virus (HIV) and Tuberculosis (TB), presents to the emergency room on October 30th 2018, complaining of intermittent lower extremity weakness and pain that had began in July of 2018. He initially began experiencing pain in his feet that progressed to weakness and numbness, and by October he was limping and requiring a cane to ambulate. In the 2 weeks leading up to admission he had multiple falls, prompting his ED visit.
Patient had been to the hospital in May for a recurring neck mass, which required surgical incision and drainage. Cultures from the Abscess revealed Mycobacterium tuberculosis resistant to INH via DNA probe testing and a positive Quantiferon test. Patient was diagnosed with Tubercular Cervical Lymphadenitis and started on Rifampin, Pyrazinaminde and Ethambutol (RPE) in June. During this admission he was also found to have HIV with an absolute CD4<20 and a high viral load of 444,000 copy/mL. He was started on Highly Active Antiretroviral Therapy (HAART) in June. He was discharged with outpatient follow up where his viral load and CD4 count had improved to 77 and 201, respectively.

On admission vital signs were stable. Physical exam was significant for diminished motor strength 4/5, intact sensation, positive Babinski sign, and hyperreflexia in the lower extremities. Magnetic Resonance Imaging (MRI) revealed extensive extra-medullary intradural enhancing lesions in the thoracic spine consistent with leptomeningeal disease. Patient was admitted to the Intensive Care Unit for frequent monitoring, started on Dexamethasone for cord compression, and Neurosurgery was consulted. He underwent a laminectomy with intra-dural biopsy on November 1st, and was continued on a dexamethasone taper. Pathology results showed pachymeningitis with mixed inflammatory cells including lymphocytes, histiocytes, and plasma cells, but no granulomas and negative Acid Fast Bacilli (AFB) stain. Patient improved and was discharged on steroid taper and outpatient follow up.

Discussion: Patients who are started on anti retroviral therapy are at risk of immune reconstitution inflammatory syndrome (IRIS). The occurrence and severity of developing IRIS is based on the extent of CD4 T cell immune suppression at time of diagnosis and the degree of viral suppression following initiation. In addition, there is higher incidence (36%) of IRIS in patients who have co-infection with Tuberculosis (TB) compared to 2% in non-coninfected patients. The time interval of IRIS after initiation of HAART therapy in co-infected Individuals ranges from 10-180 days. Our patient was at high risk for IRIS given his high viral load prior to therapy, rapid immune recovery following initiation of HAART, and co-infection with TB.

Conclusions: Central Nervous System Immune Reconstitution Inflammatory Syndrome (CNS-IRIS) is a paradoxical worsening of a pre-existing opportunistic infectious process presenting with neurological symptoms, after the initiation of anti-retro viral therapy. We present a case of severe CNS-IRIS in a patient recently diagnosed with HIV and TB simultaneously. It is advised that both HAART and anti-tuberculin therapy be continued in such patients, along with adjacent high dose corticosteroids in those who exhibit severe symptoms. Although the incidence of CNS-IRIS is reported to be less than 1%, we believe that timely diagnosis and management are of utmost importance in preventing worsening neurological status. 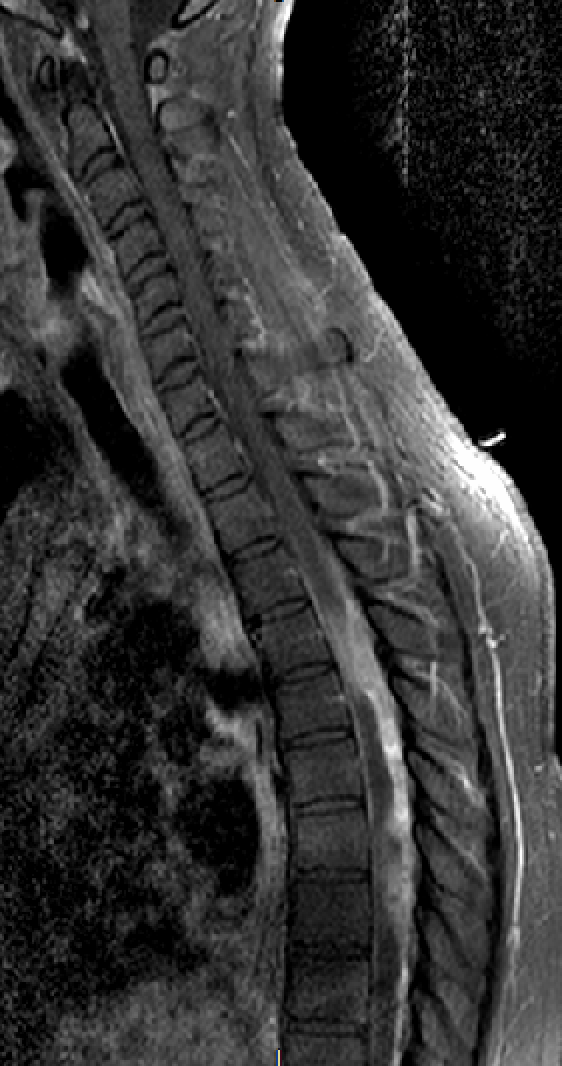