A 5‐month‐old female with worsening skin rash for 2 months was admitted for evaluation. The rash began as generalized flesh colored papules on the upper chest and antecubital fossae. Initially, the patient was treated with OTC moisturizing creams. However, the rash began to spread to include her face and abdomen. The color changed from mild redness to dark red and black coloration. The patient was evaluated in the ED and diagnosed with eczema and given Aquaphor. One week later, the patient began to have fevers, and the patient's neck folds looked raw and had begun draining fluid. She was admitted and started on Acyclovir and Ceftriaxone. The patient was then transferred to a tertiary care facility for further evaluation. On physical examination, there was diffuse papular rash with erythematous base sparing palms, soles, and vaginal area. Additionally, the patient had a large denuded area of skin within the neck fold which was draining purulent fluid. Wound culture grew Staphylococcus aureus. Viral skin studies were positive for HSV‐1. The patient was treated for eczema herpeticum with concomitant superficial MSSA infection. She began to have significant improvement by day 2 of antibiotics and antiviral medications and was discharged home on Keflex, acyclovir, and topical wound care.

Eczema herpeticum is a viral infection of inflamed skin, most often seen in patients with severe untreated atopic dermatitis. Infections can last several weeks. Other symptoms include lymphadenitis and fever. Most cases are due to HSV‐1 and/or HSV‐2, but there have been identified cases of coxsackie or vaccinia superinfections. Most cases also have staphylococcal skin colonization. Less than 5% of eczema herpeticum cases with positive skin colonization resulted in systemic bacterial infection in recent multicenter studies. However emerging studies indicate that Staphylococcal A toxin may increase viral load within the keratinocytes, thus predisposing atopic dermatitis patients to HSV infections. Mortality rates for eczema herpeticum are low; however, studies have shown that early recognition and initiation of acyclovir and antibiotics can significantly decrease patient's length of stay.

Eczema herpeticum should be considered in all severe untreated atopic dermatitis patients with changing rash patterns. Early recognition and early initiation of acyclovir can reduce hospital length of stay. Most patients with eczema herpeticum have Staphylococcus aureus skin colonization, but a small percentage of these patients will progress to systemic bacteremia. Finally, early recognition and initiation of antibiotics can reduce serious complications. 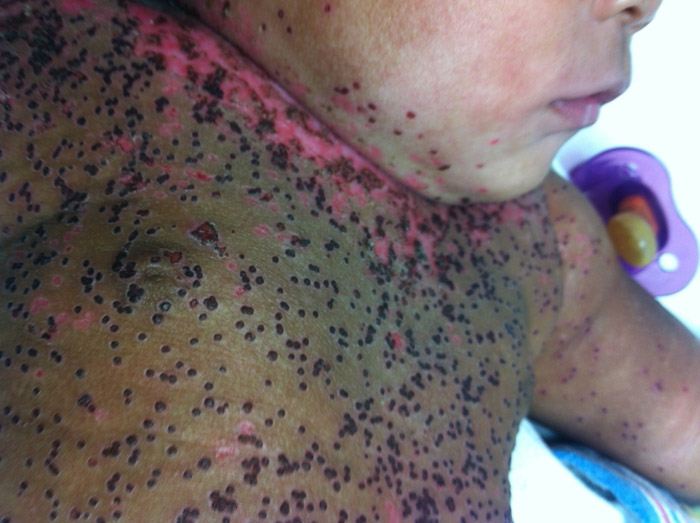