Case Presentation: Here we report a case of atypical manifestation of SLE in a 53 year old man who presented with neutropenic fever. Physical findings of interest included oral ulcers, a malar rash across the bridge of the nose, and a discoid-like rash on extensor surfaces of the elbows and knees. Labs were remarkable for ANC <100, weakly positive anti-dsDNA, elevated rheumatoid factor, ferritin >1000 ng/mL, low C3/C4, and positive direct Coombs’ test. Rheumatologic labs were largely negative, including a negative ANA, anti-Smith, anti-SSA/SSB, and anti-MPO/RNP. Skin biopsy revealed atrophic dermatitis suggestive of lupus. MRI brain suggested CNS vasculitis, and CT chest showed bilateral pleural effusions. A thorough workup for infection and hematologic malignancy was negative. Based on these findings, the patient fulfilled 9/17 of SLICC criteria and 5/11 ACR criteria for SLE, and was treated for presumed SLE. Two days after initiation of therapy with 25mg IV solumedrol twice a day, the patient’s daily fevers resolved and ANC drastically improved, with ANC of 2000 after two weeks of steroid treatment. Later, he was found to have a high titer of anti-neutrophil antibodies.

Discussion: Systemic lupus erythematosus (SLE) is a chronic, inflammatory, connective tissue disease that commonly affects a variety of organs due to an overactivation of the body’s immune system. Leukopenia, a decrease in granulocytes and/or lymphocytes, is a common hematological manifestation of SLE. However, severe autoimmune neutropenia occurs in only 5% of patients and may correlate with high anti-neutrophil antibody activity, as demonstrated in our patient. The mechanism of autoimmune neutropenia in SLE is unknown but may involve increased peripheral destruction, decreased bone marrow production, and increased margination. There are currently no guidelines for therapy, though G-CSF and methylprednisolone have been tried with success in one study. For our patient, we started him on low dose IV solumedrol and found that he responded drastically. As our patient had strongly positive nonspecific anti-neutrophil antibodies in the setting of a negative ANA, it is likely that there are other currently unknown antibodies associated with SLE which may correlate strongly with autoimmune neutropenia.

Conclusions: Autoimmune leukopenia is a common presentation in patients with SLE, while severe autoimmune neutropenia is an uncommon finding that may correlate with high anti-neutrophil antibody activity. A strongly positive anti-neutrophil antibodies titer was found in the setting of a negative ANA, suggesting that more biomarkers are associated with SLE than those that are currently known. Currently, the 1997 ACR and 2012 SLICC classification criteria have been useful in guiding clinical judgment. We are hopeful to see an increase in certainty of diagnosis for variable presentations of SLE with the advent of a new classification criteria and new biomarkers currently in development. 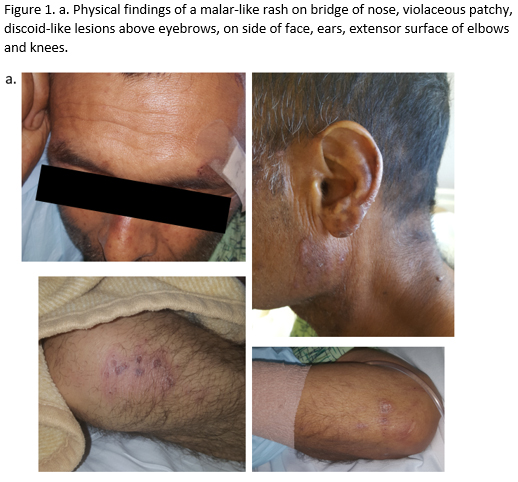