Background: Timely Clostridium difficile Infection (CDI) testing is challenging but is important for faster and appropriate isolation and treatment of patients. Few studies have specifically addressed effective methods to hasten CDI testing without relying on PCR. We sought to use Quality Improvement methodologies including the Plan-Do-Study-Act (PDSA) Cycle and Control Charts to reduce CDI testing delays.

Methods: This Quality Improvement and Infection Control project was conducted in a large, academic medical center in the Bronx. As part of a larger effort to decrease hospital onset CDI and improve appropriate CDI testing, a multidisciplinary team of nurses, front-line doctors, healthcare epidemiologists, quality improvement experts, Infection Preventionists, Microbiologists, and systems engineers met weekly to reduce the CDI Turn Around Time (CDI-TAT) defined as time from order to result of a CDI test. Plan-Do-Study-Act (PDSA) cycles targeted small tests of change at one of three domains: collection of the specimen, transportation of the specimen, and analysis of the specimen in the laboratory. 5 PDSA cycles were performed. Results were analyzed by a comparison of means using t-tests as well as a Quality Improvement assessment examining for 8 points in a row below the mean on a control chart, which is routinely used to indicate special cause variation, the equivalent of statistical significance.

Results: On examination of the Control Chart (Figure 1), 2 of the 5 PDSA cycles were successful in decreasing CDI-TAT, both of which targeted analysis of the specimen. The mean CDI-TAT decreased from 34.8 to 28.7 hours (p<0.001) after the second PDSA and decreased further to 23.5 hours after the final PDSA cycle (p<0.001). These gains were sustained through the following 6 months without additional resources. Furthermore, these gains in timing allowed for additional interventions targeted at reducing hospital onset CDI, the outcome measure. An unexpected benefit of the changes was a more efficient and therefore acceptable testing algorithm for the laboratory. 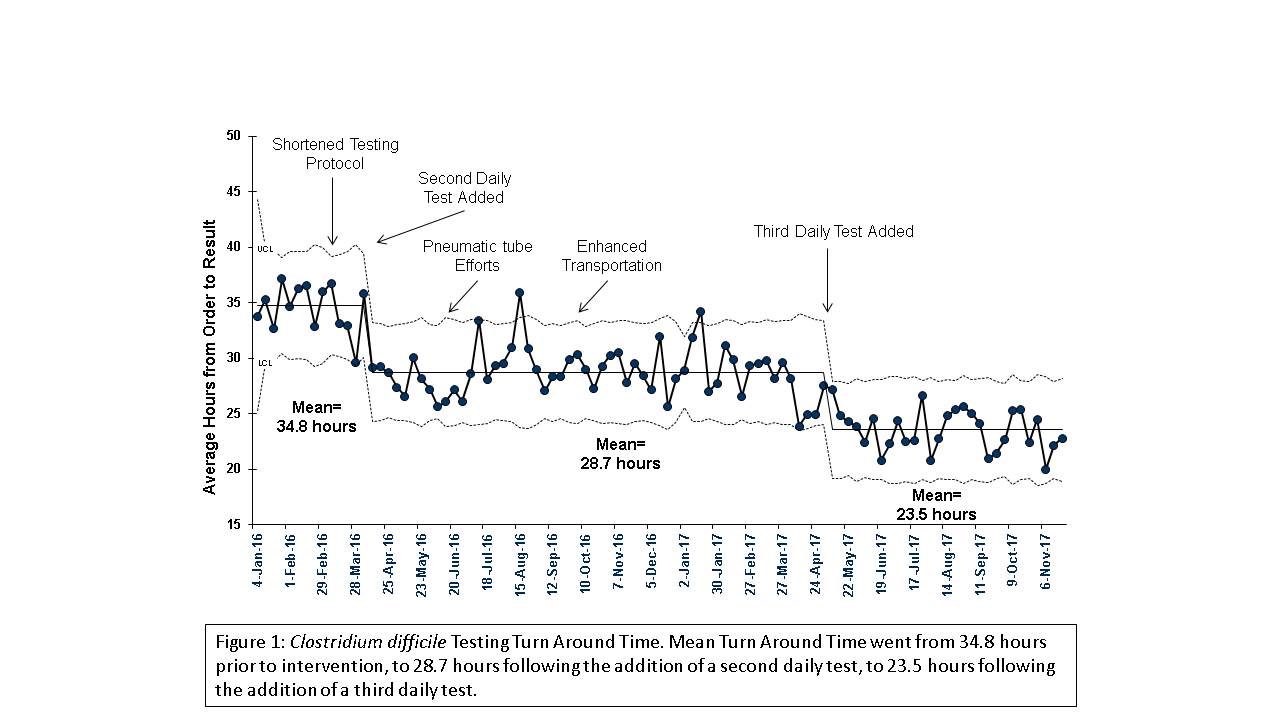