An 85 year old man with past medical history of dilated cardiomyopathy (Ejection Fraction 15%), non sustained ventricular tachycardia (VT) status post automatic implantable cardioverter defibrillator (AICD) placement in 1997 and 2004, atrial fibrillation on coumadin, and stage IV chronic kidney disease who presented to the outpatient clinic with alarming AICD and was found to have had multiple episodes of defibrillation through the AICD interrogation. The patient was referred to our hospital and admitted to the CCU.

4 days prior to admission, the patient was admitted to other hospital, because of the alarming AICD. Patient was admitted for NSTEMI (peaked troponin 3.2) and also found to have had 7 episodes of VT which resulted in defibrillation through the AICD interrogation. Serum potassium on admission was 3.2 and was assumed to be the cause of VT. Patient was treated with potassium repletion and was discharged with digoxin 0.125mg po daily and with an increased dose of lasix 40mg po daily. His creatinine level at discharge was 2.6 and digoxin level was 1.4.

On admission, patient did not have any complaints except decreased appetite. Vital signs were all within no limit and other physical examinations were significant for irregularly irregular heart sound with 3/6 holo‐systolic murmur at right sternal border. Initial lab results were significant, identifying worsening creatinine level of 3.36 and a high serum digoxin level of 2.2 with normal potassium at 4.0, magnesium at 2.4 and troponin at 0.157. The CXR showed cardiomegaly with small right pleural effusion. The EKG showed polymorphic non‐sustained VT. Digoxin intoxication was suspected, digoxin was discontinued, and the patient was started on 3 vials of digibind. Given worsening creatinine from his base line (2.6 → 3.36), enalapril, lasix, metolazone were withheld. On hospital day 2, the patient was transferred to the regular floor with telemetry monitoring. There were no further episodes of VT detected. His creatine was improved to his base line (2.19) and the patient was discharged with cardiology follow up on hospital day 4.

Digoxin usage has become less popular in the treatment of congestive heart failure and atrial fibrillation as a result of its inferiority to beta‐adrenergic inhibitors and agents that interfere with the deleterious effects of the activated renin‐angiotensin‐aldosterone system. As a result of this reduction of usage and dosage, digoxin toxicity has become uncommon and actual hospitalization has been declining, even though, digoxin toxicity can cause life‐threatening arrhythmia, like VT, and has been related to higher mortality. Given the narrow therapeutic range of serum digoxin levels and the significant overlap between patients with toxicity and without toxicity, even slight elevations of digoxin levels can cause digoxin toxicity, especially among patients with advanced heart disease, underlying atrial fibrillation, or renal failure. And there is also some evidence which has showed positive relationship between digoxin toxicity and diuretic use, especially with any combination of diuretics.

Therefore it is important to pay attention to possible digoxin intoxication especially when patients with a high risk of digoxin toxicity on diuretics presents with VT. In this case, urgently treat with digoxin‐specific Fab fragments. 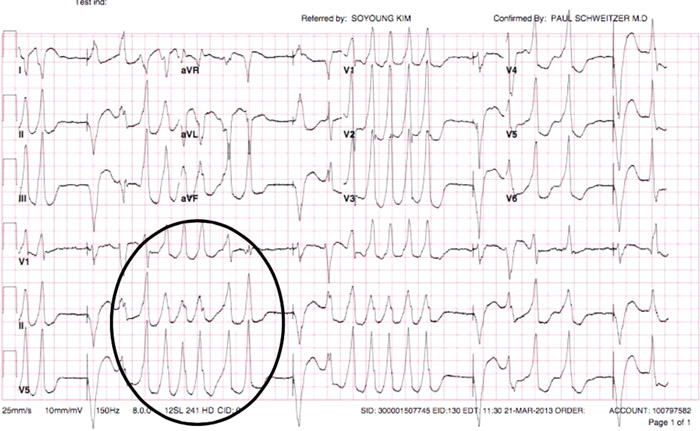