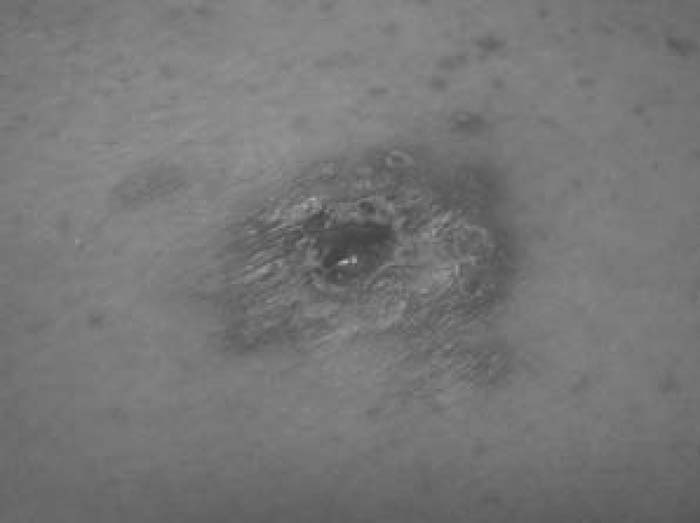 Tularemia is an uncommon zoonotic infection caused by the highly infectious gram‐negative coccobacillus Francisella tularensis. With approximately 120 cases per year in the United States (in all states except Hawaii), major sources of human infection include ticks and rabbits. There are no recorded cases of human‐to‐human transmission, although laboratory workers are at significant risk of the inhalational form of the disease. Clinical manifestations include the ulceroglandular form (most common), in which a slow healing ulcer is associated with inflamed regional lymph nodes. Other syndromes include glandular, oculoglandular, oropharyngeal, typhoidal, intestinal, and pneumonic forms. Fever, chills, myalgia, and headache are common, as are a variety of skin lesions ranging from nonspecific rashes to ulcerative lesions. Because of tularemia's relative infrequency and nonspecific presenting symptoms, there is often considerable delay in diagnosis and initiation of effective therapy. Diagnosis is usually based on tissue culture, PCR, direct fluorescent antibody, or seroconversion 2‐7 weeks after exposure. Intravenous gentamicin is the most effective treatment in pediatric populations, although fluoroquinolones may offer similar efficacy with less toxicity. With no direct exposure to an infected mammal, the most likely route of infection for this patient in a tick‐endemic area would be from an unrecognized tick bite.

We have described a case of ulceroglandular tularemia, most likely from the bite of an infected tick. Even in the absence of direct exposure to traditionally recognized mammalian carriers, this uncommon but treatable condition should remain a diagnostic consideration by pediatric and adult hospitalists.