Case Presentation: A 55-year-old man was found altered in his truck in front of an abandoned building.  Neighbors called EMS after noting that the patient had not moved from his position in 4 hours.  On evaluation, the patient reported that he had just left work.  He was afebrile with mild tachycardia (heart rate: 112 beats per minute).  He was cachectic and demonstrated lateral nystagmus.  Additionally, he was only oriented to his name.  He had an ataxic gait, poor memory, and poor concentration.  Laboratory evaluation demonstrated undetectable ethanol, acetaminophen, salicylate, and ethylene glycol levels.  A urine drug screen, volatile alcohol screen, HIV, and RPR were negative.  A head CT demonstrated no acute abnormalities.  The patient was admitted for further evaluation.   On repeat interactions with the patient, the medical team became concerned that the patient was confabulating.  An MRI was performed and images demonstrated diffusion restriction with associated FLAIR hyperdensity in the medial thalami and hyperintensity in the splenium of the corpus callosum (image), findings that could be found in Wernicke encephalopathy.  Family was reached, and reported that the patient had not worked since being laid off a year ago.  Additionally, the patient’s wife noted that he had a significant history of alcohol use.   The diagnosis of Wernicke-Korsakoff syndrome was made and the patient was started on IV thiamine.  Treatment for his alcohol use disorder was offered.

Discussion: Classically, patients with Wernicke-Korsakoff syndrome present with a triad of confusion, nystagmus, and ataxia, as did our patient.  MRI images demonstrated changes consistent with Wernicke encephalopathy and family reported a history of significant alcohol use, the likely cause of our patient’s vitamin deficiency.  While recovery is possible, prevention is key.  Patients should be encouraged to abstain from alcohol use, educated on the importance of a balanced diet, and offered treatment for their alcohol use disorder.

Conclusions: This case helps remind physicians of the potential for thiamine deficiency in patients with alcohol use disorder and of the possibility for prevention with vitamin supplementation and substance abuse treatment. 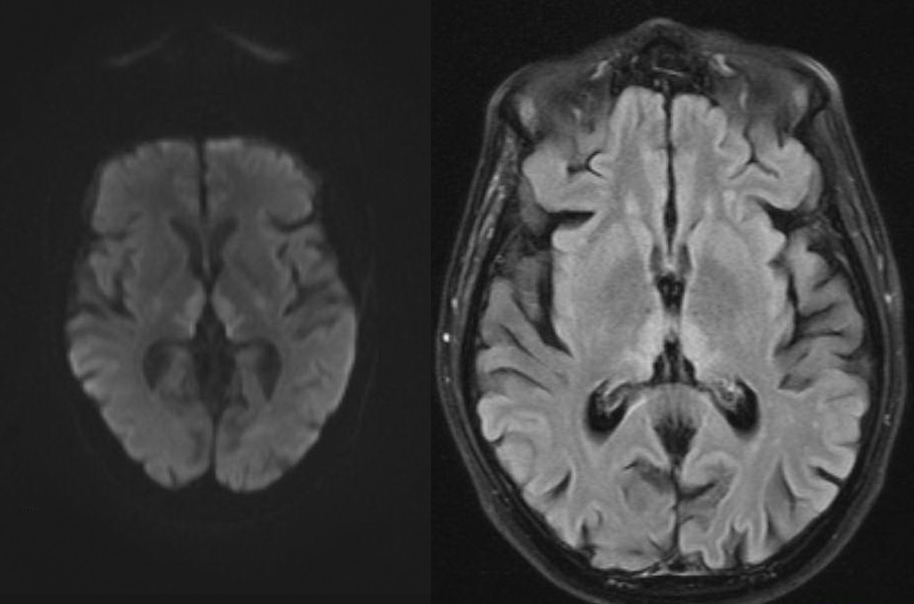