Background: Nationally, there has been a loss of pediatric inpatient beds (-4.3%), and large swings in ward (-7.2%) and pediatric (non-neonatal) intensive care (PICU; +15.8%) beds.  These shifts have important implications for access, safety and costs; however, studies on this topic are limited.  We aimed to identify variation in pediatric inpatient beds (change in absolute numbers and per 100,000 population) across states and trends over time.

Methods: Data from the American Hospital Association (AHA) Annual Survey Databases for FY2002 and FY2011, and U.S. Census Bureau Population division were reviewed. Only data for children age 0-17 years and pediatric bed definitions were used. Changes in the national bed counts in each state were compared for a ten-year period from 2002 to 2011. The number of inpatient beds available in each state relative to the pediatric population for that state was calculated as: (Number of inpatient beds / Pediatric population for the same geographical area) x 100,000. Statistical analysis was performed using SPSS version 24.0.0.

Conclusions: Our data demonstrates substantial variation between states in inpatient pediatric bed change when normalized per 100,000 population between 2002 and 2011, with greatest losses in states that are significantly rural and/or geographically separated from other states. Health systems must be capable of delivering services equitably, efficiently, and in a coordinated manner. Most traditional health systems coordinate only regionally, with rarer cross-state networks. Unplanned losses of pediatric beds increase the risk for poor access and therefore worse health outcomes. Vigilant assessments of healthcare networks for children are needed in all states to identify consistently underserved areas, assessment of needed networks, and targets for future interventions. 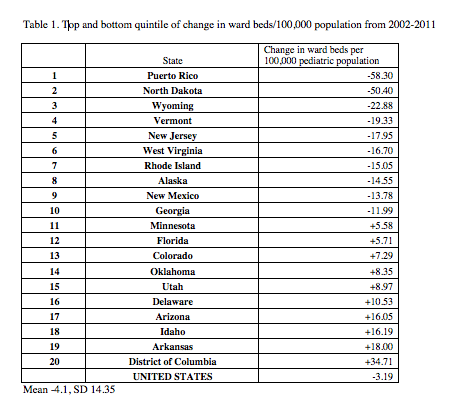