A 69 year old female presented with intermittent dyspnea associated with mild bilateral ankle swelling for 6 months. Her physical examination was significant for bibasilar fine crackles with some trace pedal edema. Her labs were normal other than elevated BNP (575 pg/ml) with CXR showing mild fissural thickening. Chest CT showed diffuse micronodular lung disease and small bilateral pleural effusions. To rule out cardiac etiology a 2d Echo was obtained that showed left atrial and ventricular wall thickness with moderate pulmonary hypertension. A right and left heart catheterization was obtained to r/o any coronary abnormality that was normal. She was diagnosed with diastolic dysfunction and was discharged on diuretics but her symptoms persisted and she returned to clinic. Her repeat CT scan showed unchanged diffuse micro‐nodular lung disease with moderate bilateral pleural effusions. A repeat echo showed speckled appearance on the cardiac surface and a fat pad biopsy was done to rule out amyloidosis, which was normal as her bronchoscopy. At this point cardiothoracic surgery consult was obtained for video assisted thoracoscopy, evacuation of pleural fluid and wedge resection. The biopsy results showed lung parenchyma with scattered minute meningothelial‐like nodules (minute pulmonary chemodectoma). She was discharged on steroid inhalers along with diuretics with significant improvement thereafter.

Pulmonary chemodectomas are minute pulmonary meningothelial nodules within lung interstitium. They are mostly single, but can be multiple lesions with unilateral/bilateral involvement. To our knowledge, cases of symptomatic meningothelial nodules have only been reported once in 5 patients (2007, Moran etal). It’s mostly a disease of females in their 5th or 6th decade of life and might be associated with caridio or pulmonary symptoms. Korn etal tried to explain the histology in 1960 the very first time when it was thought to be proliferative lesions of the lungs with a chemoreceptor origin. In 1967 & 1971 Spain and Ichinose et al tried to relate its etiology to pulmonary thromboemboli. It was in 1975 & 1976 when Kuhn and Chrug et al established that these lesions are not paragangliomas rather resemble meningeal arachnoid cells and the cells of meningiomas that have right sided preference.

The symptoms vary from asymptomatic to symptoms of Asthma, COPD, and heart failure. The real challenge is to clinically suspect and diagnose these lesions. The normally used modalities like Chest X‐ray, spirometry and CT scan have failed to detect these lesions. The only promising confirmatory tests are transbronchial biopsy with Immunohistochemical stains (positive for vimentin and negative for CD31 & chromogranin) as well as video assisted thoracoscopic surgery (positive staining for progesterone receptors (PR) and epithelial membrane antigen). The electron microstructure has also been reported as complex interdigitating cell processes connected by desmosomes and occasional cytoplasmic filaments but lacking neuroendocrine features. There is no specific management other than aggressive allergy, asthma and heart failure management with fairy good prognosis.

Pulmonary chemodectomas have failed to gain researchers attention and sometimes requires a million dollars work up for diagnosis as in this case. Much more exploration needs to be done in diagnosis and management of this condition to make it easily diagnosable entity. 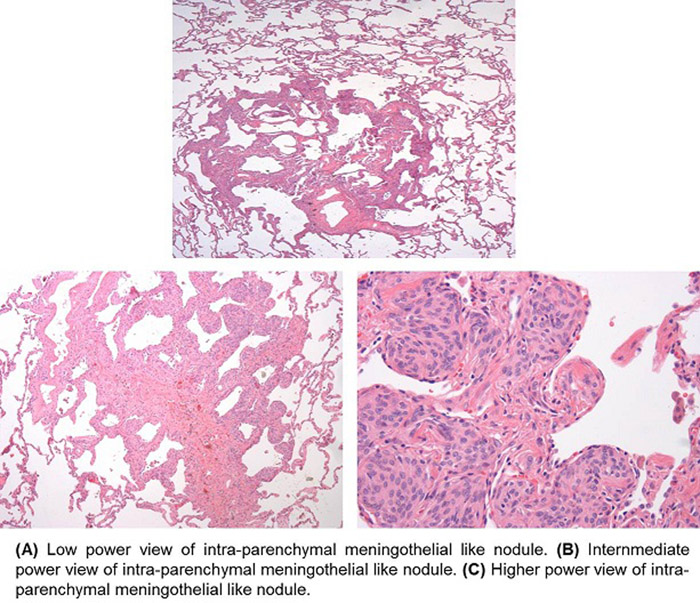