Case Presentation: A 55-year-old obese female presented with daily high fevers, chills, night sweats, malaise, decreased appetite, and nausea for two weeks. Her past medical history is significant for laparoscopic adjustable gastric band (LAGB) surgery eight (8) years prior. On presentation, she was febrile, tachycardic with pallor and hypotensive. Cardiopulmonary and abdominal examination was normal, but the laboratory data revealed leukocytosis with predominant lymphocytes, microcytic anemia, cholestatic transaminitis, elevated lactate, negative acute hepatitis panel, and negative urine drug screen.
The patient was treated initially with intravenous normal saline, vancomycin, piperacillin-tazobactam and briefly required norepinephrine infusions while in the emergency room. Contrast-enhanced computed tomography (CT) of the abdomen and pelvis revealed a large (7cm x 6cm x 6cm) multi-loculated hepatic abscess. A percutaneous drain was placed under CT guidance with purulent fluid removed. When the fluid and blood cultures grew Streptococcus viridans, antibiotics were deescalated to ampicillin after sensitivities resulted.
The patient continued to have nightly fevers for five days despite appropriate antibiotics and negative surveillance blood cultures. Transthoracic echocardiogram (TTE) revealed a small mobile mass attached to the eustachian valve (Fig. 1). With severe iron deficiency anemia and cultures positive for group D Streptococcus, colonoscopy and esophagogastroduodenoscopy (EGD) were performed which ruled out malignancy but showed a foreign body eroding through the gastric lumen (Fig.2). The patient was taken into surgery for laparoscopic removal of the gastric band without any complication.
She tolerated regular diet by postoperative day three and at the time of discharge had received a four-week course of intravenous antibiotic therapy. She was discharged home with an additional two-week course with amoxicillin-clavulanate after consultation with infectious disease specialist with repeat CT showing improvement in the hepatic abscess. The patient was discharged home with the hepatic drain in place to follow up closely with surgery.

Discussion: Eustachian valve endocarditis (EVE) is an extremity rare entity with the most common predisposing factors being intravenous drug and indwelling central venous catheters users. Most reported cases were diagnosed with TTE alone with most cultures growing Staphylococcus aureus but some reports of Streptococcus viridans. Early source control is essential to decrease morbidity and mortality. As such, clinicians must have a high index of suspicion as the majority of cases with eroded gastric band presents asymptomatically while those with EVE do not always present with symptoms consistent with right-sided endocarditis. Early TTE and or TEE of all valves including Eustachian valve will ensure vegetations are not missed.

Conclusions: This is the first account of eustachian valve endocarditis (EVE) with concomitant pyogenic liver abscess as a complication of LAGB surgery. Since the bariatric surgery requirement of a body mass index (BMI) of 35 or higher was established, ( and emerging evidence supporting the clinical and cost-effectiveness of a surgical intervention), LAGB procedures are fast becoming the popular procedure choice for most surgeons. LAGB-associated EVE may become important in the future as such clinicians need to be aware of this uncommon, but potentially serious complication when assessing these patients.

IMAGE 2: Esophagogastroduodenoscopic view of the gastric band erosion into the gastric lumen 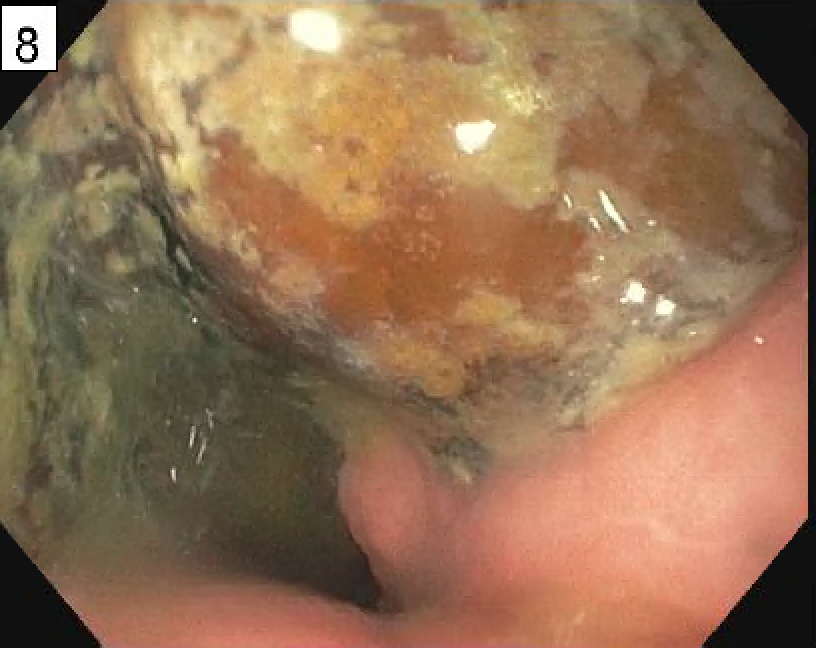