Case Presentation: A 36-year-old female was referred for an infectious disease consultation for severe lower back pain, 40 lbs weight lost over 6 months and abnormal MRI imaging consistent with discitis. She was in excellent health until 6 months prior to presentation, when she developed left gluteus muscle swelling, severe left hip and lower back pain. She was seen by an orthopedic surgeon, and treated with muscle relaxants, oral steroids and physical therapy for a presumable left pyriformis muscle sprain and sacroiliitis.Her pain improved but two months later pain in the lower back, right hip and sacrum returned. During this time she recalled unusually severe menstrual bleeding and cramps. MRI of the lumbar spine detected L1& L2 vertebral bodies’ partial destruction and collapse (Fig.1).
The patient was athletic and in excellent health with no past medical history.
She was married and had 4 children. Vital signs were WNL and physical exam was remarkable for spinal tenderness at L1,L2, and L3 location. A slight weakness of the right leg muscle strength was noticed although her exam was limited by pain. Sensation was intact. She was admitted to the hospital for a CT guided aspiration of the spine, and a neurosurgical evaluation. A repeat MRI revealed mild sacroiliitis on the left and a low
Grade partial tear of the right hamstring tendon.
Laboratory data including screening for latent TB and HIV test was unremarkable. The spinal aspirate grew MRSA. Surveillance cultures from nares, axillae, and groin
were negative but the cervical/ vaginal culture grew MRSA. She was treated with 2 weeks of IV vancomycin and oral rifampin, followed by 6 weeks of IV vancomycin alone resulted in immediate improvement. Repeated MRSA screening cultures were negative. The repeated cervical culture one month after completing therapy again grew MRSA. At this time, she again experiencing abnormal bleeding and severe cramping. Further questioning revealed that she had an intrauterine device placed 3 years ago, which was thought to be contributing to her inability to clear MRSA cervical infection
.
IUD removal was immediately performed by her GYN clinic; she was treated with a 14 day course of oral doxycycline and rifampin. Six months out, she continues to do well, repeated culture remains negative.
No surgery required, although her CT scan shows significant necrosis and destruction of L1 and L2 vertebrae.

Discussion:
IUDs are a popular contraceptive method. It considered safe but may cause inflammation and microtrauma in the uterus.
As a result PID and other systemic infections may develop.
Complications from modern IUD’s are rarely reported but could be
serious. Our patient developed spinal osteomyelitis. The exact pathophysiology can only be surmised: a plausible scenario is that the device became colonized by MRSA, triggered a low grade pelvic infection, and then spread by contiguity to a vulnerable distant site. Diligent work up, close monitoring, and detailed history revealed the infection source. Her prompt improvement after IUD removal on appropriate
antibiotic therapy also proved that the patient’s illness was driven by an infection of the
IUD an insufficient source control until removal of the device.

Conclusions: MRSA osteomyelitis in a healthy individual is uncommon; the source should be identified and controlled in order to prevent serious
complications. 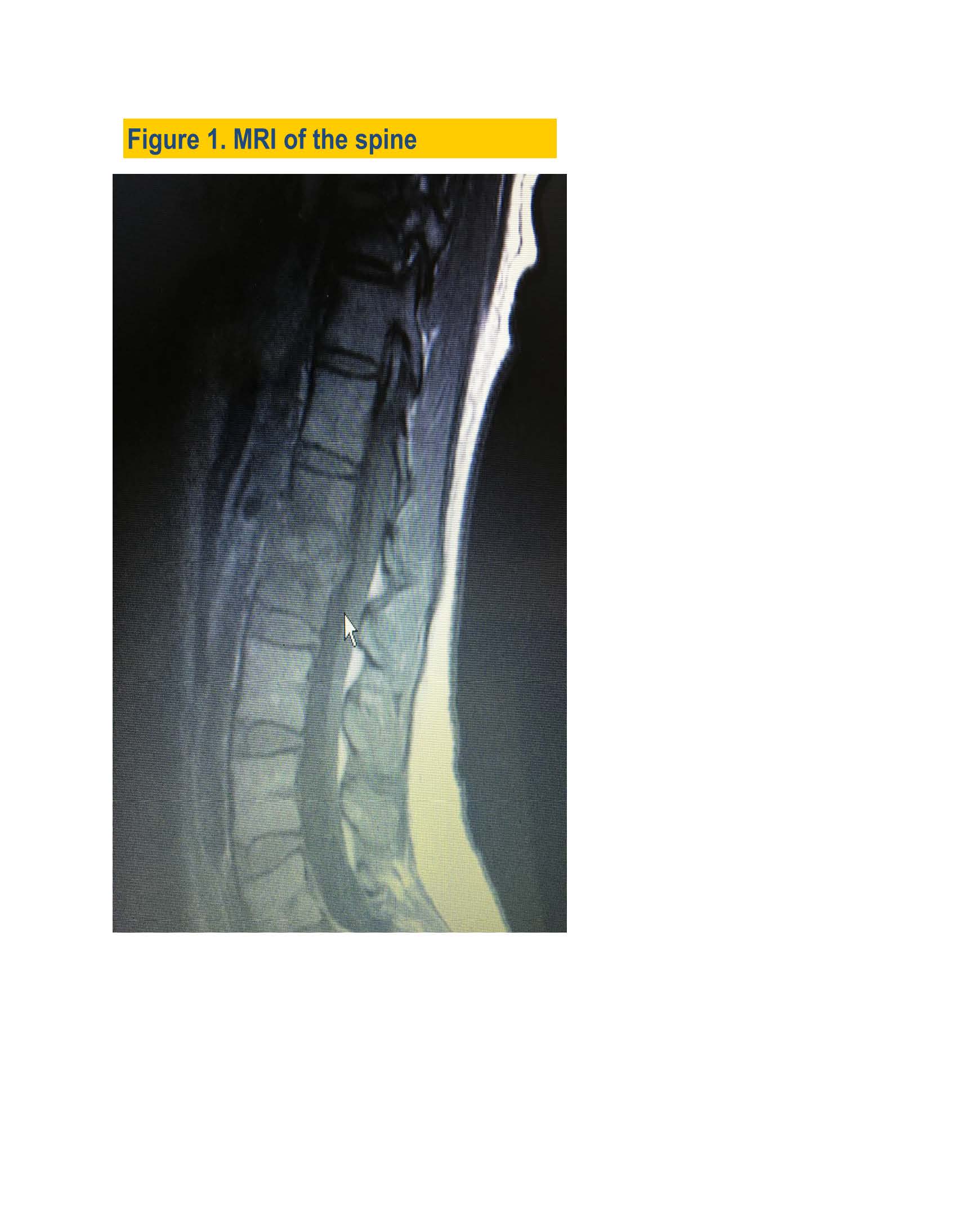