Hospital‐acquired anemia(HAA) is associated with worse health status, higher hospitalization rates, increased length of stay, need for blood transfusions, greater medical costs, lower quality of life, and higher mortality. Therefore, there has been a strong focus on HAA as it can potentially be prevented. Prior studies showed almost half of the patients hospitalized with acute myocardial infarction developed HAA. This study was conducted to find the prevalence, incidence, and amount blood drawn in hospitalized patients at our own institution.

A retrospective study of 902 adult hospitalizations in March of 2012 in a single academic medical center was conducted. Demographics, hospital information(location, length of stay, transfusion requirements), and laboratory data, including daily hematocrit levels, hemoccult results if obtained, initial and discharge creatinine, MCV(mean corpuscular volume), were analyzed using administrative data. Patients with positive hemoccults, abnormal creatinine values (indicating dehydration and possible hemoconcentration), and who received blood transfusions were excluded from the study. In addition, 200 tubes of blood for each type of testing were measured to obtain average amount of blood drawn per test ordered.

HAA was defined as absence of anemia on admission, but development of anemia at discharge, and further categorized as severe (Hct ≤27.0%), moderate (Hct 27.1 to 33.0%), or mild (Hct 33.0 to 36.0%). Overall there was a 7.6% incidence of hospital‐acquired anemia during the month of March, 2012. For every 10,000 admissions (if the 902 patients in March was extrapolated to a year), about 760 patients would develop anemia during the hospital course. Patients were broken down to various units, including intensive care unit(ICU), progressive care unit(PCU), medicine floor, and surgery floor, with HAA prevalence of 8.9%, 4.6%, 5.9%, 12%, respectively. However, the greatest incidence of moderate HAA was seen in the intensive care units. Figure 2 shows the hematocrit trends seen throughout the hospitalization in each of the hospital locations.

Patients averaged 3.7 tubes of blood tests per day in the hospital with an average length of stay of 3.82 days. In a given hospitalization, a patient averaged 5.8 tubes of CBC, 6.1 tubes of combined BMP/CMP, and 2.3 tubes of coags(PT/PTT), which amounted to a significant amount of phlebotomy blood loss.

Our findings suggest that hospital‐acquired anemia is prevalent in our hospital. Surgical patients seem to have the highest incidences, but are predominantly mild anemia. On the medicine services, the higher acuity patients in the intensive care units had higher incidences of HAA with more moderate to severe anemia than the lower acuity patients on the general medical service. Further studies are needed to determine interventions that can be used to reduce the frequency of HAA 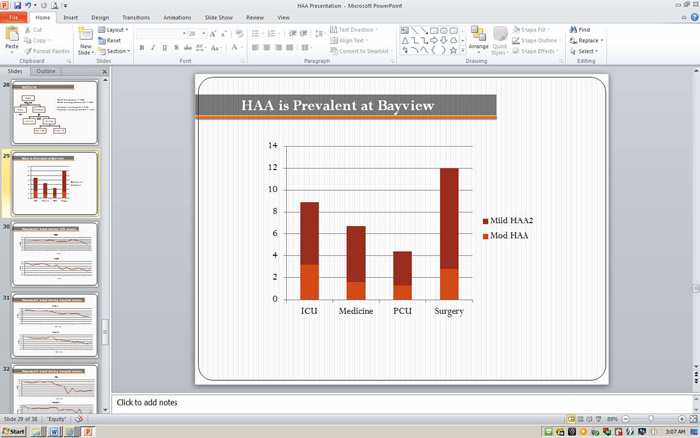