Background: Reversing the life trajectory of hospitalized patients can be challenging. Sixty percent of Americans die in acute care hospitals. Identification of the patient care goals and directives frequently happens after many days of aggressive, uncomfortable and costly interventions at the hospital. We aimed to elucidate if identification of care goals earlier in Intensive Care Unit (ICU) admissions could provide patients and families with more patient-centered and compassionate care without affecting mortality rates.

Methods: This analysis was designed as a retrospective chart review to investigate 1) mortality rates, 2) ICU length of stay (ICU LOS), and 3) hospital length of stay (HLOS) at the Twin Cities Community Hospital in Templeton, CA. Demographic and outcomes data were reviewed from the ICU for 2012, 2014 and 2016. The data was reviewed in Q2 for each year to reduce seasonal variation. These years were selected because of operational changes at the ICU. In 2012, ICU coverage was provided by a local Pulmonary Critical Care group. In 2014, the Intensivist Group (TIG) became the provider of critical care services, focusing on a multi-professional critical care model practicing “Right Care, Right Now”. In 2016, the ICU started a Palliative Care service. There were three main changes in ICU coverage over this timeframe. First, goals of care were identified immediately upon admission to ICU. Second, intensivists were readily available. Third, daily meetings took place with families of seriously ill patients.

Results: The ICU admission and mortality rates were similar across the years. The number of admissions in 2012, 2014 and 2016 were 207, 235, and 226, respectively. The mortality rates in 2012, 2014 and 2016 were 6.28%, 8.09% and 6.19%, respectively. The differences in mortality rates were not statistically significant, indicating that identifying care goals and listening to the patients and their families did not alter mortality rates.
There were changes in LOS in patients that died during the admission (Figure 1). The ICU LOS and hospital LOS were 3.7 and 7.2 days in 2012, 2.4 and 3.8 days in 2014, and 2.07 and 2.33 days in 2016. The decrease in overall hospital LOS was statistically significant between 2012 and 2016, indicating that Intensivist-led model and palliative care consultations had a shorter LOS.

Conclusions: Early establishment of care goals appears to decrease the ICU and overall hospital LOS in patients who are seriously ill without altering mortality rates. This strategy allows for more patient-centered and compassionate care with potentially decreased pain and suffering. 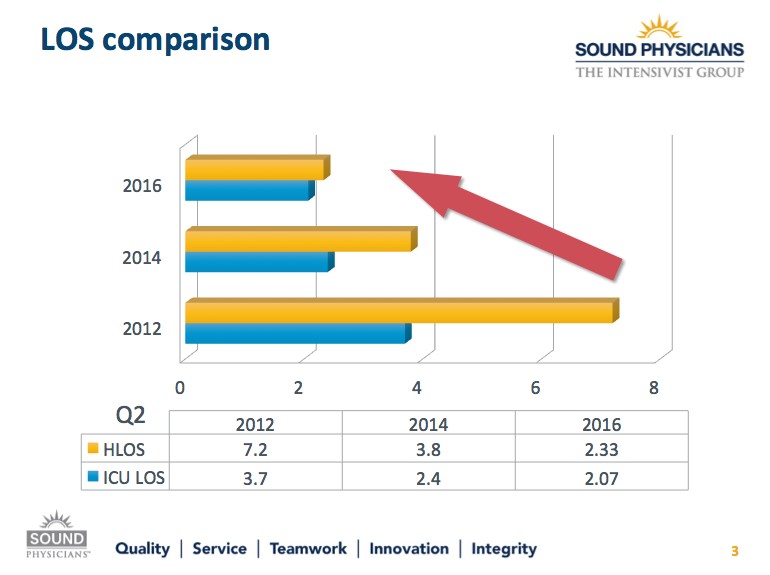