A 51-year-old male with past medical history significant for chronic pancreatitis was admitted to the hospital with a history of hematemesis and intermittent epigastric abdominal pain. About one year before the current admission, he was admitted with a history of severe microcytic anemia and a workup included an unremarkable upper and lower gastrointestinal endoscopy (up to the terminal ileum) and a negative tagged RBC scan. His hemoglobin at the current admission was 7.0 g/dL. His physical examination and laborotory results were not suggestive of chronic liver disease. Computed tomography scans (CT) abdomen showed acute on chronic pancreatitis, with pseudocyst demonstrated at the level of the pancreatic tail and blood within the wall of the duodenum (Figure 1).  Magnetic resonance imaging (MRI) abdomen showed a large pseudoaneurysm arising from the distal aspect of the gastroduodenal artery. Upper endoscopy performed showed bright red blood in duodenum and bleeding originating from the ampulla of vater. Interventional radiology guided Micro coil embolization of the pseudoaneurysm in the gastro duodenal artery was successfully performed (Figure 2). The patient was discharged home after stable hemoglobin values.

Hemosuccus pancreaticus (HP), a rare cause of gastrointestinal bleeding, is characterized by bleeding from the ampulla of vater via the pancreatic duct. HP commonly occurs as a consequence of structural disorders or disruption in vasculature of the pancreas. Clinical conditions that are associated with HP include acute or chronic pancreatitis, pancreatic malignancy, pancreatic pseudocyst, or iatrogenic damage to the pancreatic duct most commonly occurring during endoscopic retrograde cholangiopancreatography (ERCP).  Pseudoaneurysm develops in patients with pancreatitis due to self-digestion of a vessel wall by proteolytic enzymes from the pancreas or by direct pressure erosion from an adjacent pseudocyst.  These pseudoaneurysms have been reported to involve the splenic artery (60-65%), gastroduodenal artery (20-25%). Mesenteric arteriography with coil embolization is diagnostic as well as therapeutic. Surgical treatment with pancreaticoduodenectomy or pseudocyst resection may be required in severe cases. The mortality approaches 90% if untreated.[1]

Hemosuccus pancreaticus is a very uncommon cause of an upper GI bleed. However, hospitalists need to recognize the appropriate clinical setting where they need to suspect hemosuccus pancreaticus for prompt diagnosis and treatment. A CT scan followed by a mesenteric angiography can often confirm the diagnosis and effectively treat this otherwise rare yet potentially fatal condition. 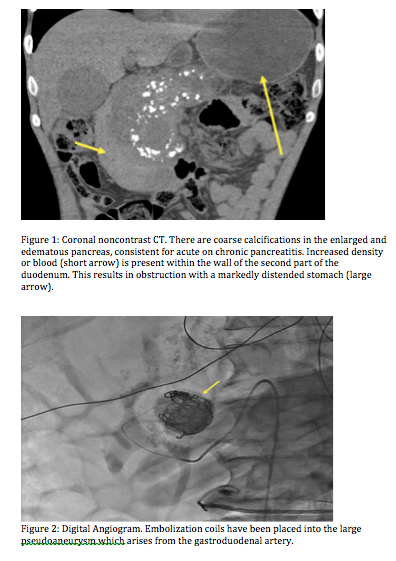