Duty hour limitations have raised concern that shorter work shifts are compressing resident workload, which may result in a negative learning environment. Increasing patient complexity intensifies workload compression; however, temporal trends in complexity of patients at admission have not been adequately defined or evaluated.

We conducted a retrospective chart review of all general internal medicine teaching service admissions at the Louis Stokes Cleveland VA Medical Center from 2000 to 2015. This observational study was granted IRB approval by the institution’s Research and Development Committee. Inclusion criteria included admission to the non-ICU internal medicine service and admission note completed by a trainee. We define admission complexity as a combination of patient comorbidity, number of notes in the electronic medical record (EMR) at admission, medication count, and problem list count. The Charlson Comorbidity Index (CCI) Deyo version was used to calculate comorbidity, which is a validated method of categorizing comorbidities based on International Classification of Diseases (ICD) diagnosis codes. Each comorbidity category carries an associated weight to result in a single comorbidity score for each patient.  Higher scores predict increased mortality and resource utilization. Using each patient’s active problem list at the time of admission, ICD-9 and ICD-10 diagnosis coding, a Deyo Charlson Comorbidity Index (CCI) for each patient at admission was formulated. In addition to average CCI, the average number of notes, medication count and problem list count at admission were calculated for each year from 2000-2015. Descriptive statistics were used for analysis.

The average complexity of a medical admission among internal medicine patients has substantially increased over time. While the CCI has been validated for patient comorbidity, there is no current measure of patient complexity. Increased number of notes, problems, and medications suggest increased time spent during each patient encounter reviewing documentation and prior data. These collective findings suggest a higher level of complexity and thus workload per admission. These findings have significant implications on workload compression in the era of duty hour limitations. 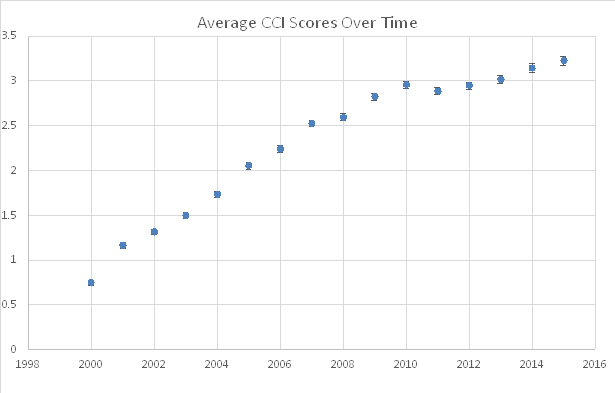