A 58‐year‐old African American male presented to the ED complaining of bilateral lower extremity edema with a medical history significant for metastatic testicular seminoma. He had undergone a right orchiectomy approximately 13 days prior to presentation. With a baseline creatinine of 1 mg/dl, he was prescribed furosemide 20 milligrams twice daily and was sent home. He returned two days later having developed leg pain, right testicular swelling and worsened lower extremity edema. His initial laboratory evaluation yielded a high anion gap metabolic acidosis and a creatinine of 6 mg/dl. He was diagnosed with acute kidney failure. The patient also complained of nausea, vomiting, loss of appetite and constipation. Review of systems was otherwise negative. Following admission, he developed dyspnea and chest pain. There was concern for a pulmonary embolus. A ventilation perfusion scan revealed a high probability for pulmonary embolus (PE) with multiple bilateral upper lobe mismatched perfusion defects. He subsequently developed diaphoresis, tachycardia, hypotension, and anuria with an acute decline in mental status. He became hypoxemic and was transferred to the critical care unit with initiation of a heparin drip and vasopressor support for shock. Subsequent bedside trans‐thoracic echocardiogram demonstrated a severely enlarged right atrium and right ventricle with severely depressed RV systolic function. His estimated RV systolic pressure was 63 millimeters of mercury. His left ventricle was hyperdynamic and underfilled. A thrombus was noted to be traversing a patent foramen ovale (PFO). The patient’s mortality was estimated to be approximately 60 to 70 percent due to the level of right ventricular systolic dysfunction. Thrombolytics were administered and he was placed on continuous veno‐venous hemodialysis for acute renal failure. Repeat echocardiogram three days later demonstrated that the right atrial clot traversing the PFO was no longer visible. The RV size and function were unchanged from previous. Over several days, the neurologic, renal and hemodynamics of the patient improved and he was transferred a general medical floor on warfarin and enoxaparin. Because of cost, the patient was eventually discharged home on warfarin. 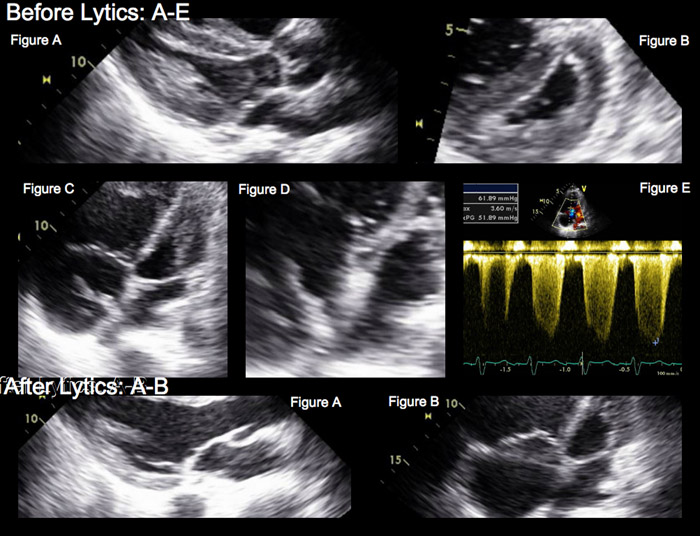