There has been a growing emphasis on increasing the value of healthcare by reducing unnecessary testing to decrease costs, though physician behavior has proven difficult to change. An event leading to reduced inpatient resources, such as with a natural or man‐made disaster, may cause physicians to be judicious about resource allocation and may provide insight into their overall ordering behavior. We sought to study the impact of a two‐day employee strike on ordering practices at an academic medical center.

During an employee strike affecting five academic medical centers in California on May 21st and 22nd, 2013, providers were strongly encouraged to decrease unnecessary diagnostic testing. We performed a retrospective analysis of laboratory and radiology utilization at our institution during the two‐day strike, adjusted for the reduced census and compared to the historical norms. We analyzed laboratory and radiology utilization for the entire medical center, as well as specifically on both an acute care general surgery and medical ward.

A two‐day strike with a perceived decrease in resources and an associated educational campaign was associated with a significant decrease in laboratory utilization but no significant change in radiology utilization. The quick return to baseline ordering after the strike ended indicates that these changes in ordering practices may be difficult to sustain. This has important implications for the SHM Choosing Wisely recommendation aimed at decreasing routine inpatient labs. 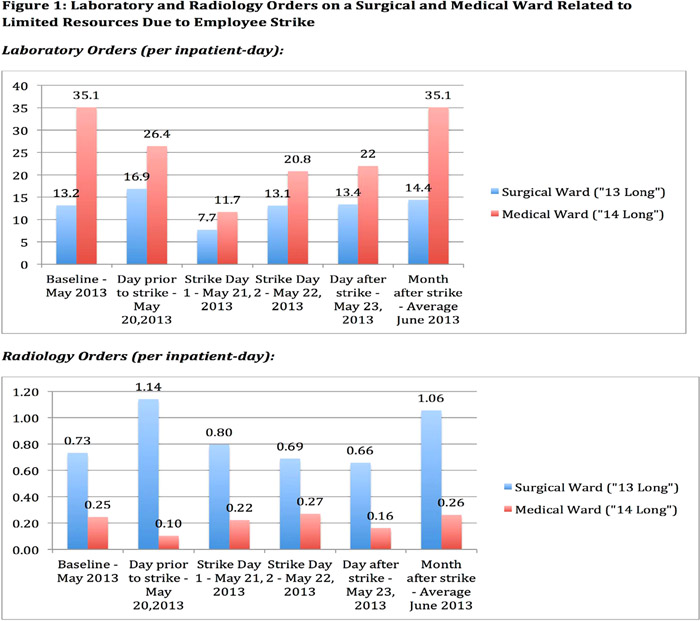