Spontaneous Adrenal Hemorrhage (AH) is an uncommon condition which may be unilateral or bilateral. AH is usually seen after anticoagulation therapy, trauma, sepsis, Waterhouse-Friderichsen syndrome and tumors. Primary adrenal cortical neoplasm rarely presents with spontaneous retroperitoneal hemorrhage. It’s uncommon to find secondary metastatic tumors to present as spontaneous adrenal bleed as a presenting problem like in our case.

The possibility of AH should be kept in mind for acute abdominal pain, especially in patients with a diagnosis of a perirenal hematoma upon imaging. The primary sites associated with metastatic involvement of the adrenal glands are cancers of the lung, gastrointestinal tract, breast, and kidney. In clinically stable patients, preoperative investigation and diagnosis for Adrenal Hemorrhage should be performed in detail with a conservative approach. Transcatheter embolization can be used to control active bleeding. If adrenalectomy is not feasible, combination chemotherapy should be applied as in metastatic disease.

Adrenal metastases are usually clinically silent and are most often diagnosed during staging procedures. Occasionally they present with acute abdominal pain from spontaneous adrenal hemorrhage. 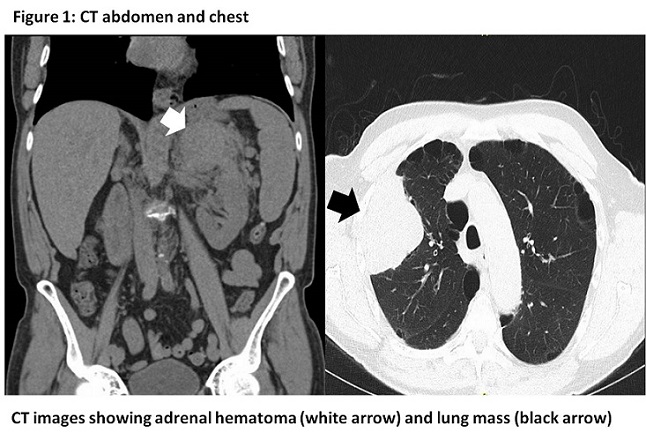