Discussion: Clinically detectable PVT is an uncommon underdiagnosed life-threatening clinical condition. Incidence is unknown as existing literature is from case reports. It is an infrequent postoperative complication of pulmonary lobectomy, lung cancer, radiofrequency catheter ablation for atrial fibrillation and lung transplant. 3 cases of spontaneous idiopathic PVT are reported in literature. Possible mechanisms of thrombosis include mechanical nature, vascular torsion, or direct injury which is thought to be the most probable precipitating factor. PVT is often seen after lung transplant involving the pulmonary venous anastomotic site due to thrombus formation. Patients often have non-specific symptoms such as cough, dyspnea, hemoptysis, hypoxemia and interstitial infiltrate in transplanted lung, hypercapnia posing difficulty to clinical diagnosis. Diagnosis is made with CT with contrast, TTE, pulmonary angiography, TEE, chest MRI. Treatment is based on pathologic finding as there are no published treatment guidelines. Existing options include antibiotic therapy, anticoagulation, thrombectomy and/or pulmonary resection. Systemic anticoagulation is used in all cases; however, the choice or duration of anticoagulation is unclear. However, short and long term anticoagulation have been successfully used. Use of Warfarin has been reported which was used in our patient, achieving resolution of PVT. Making a diagnosis of PVT is important due to its grave complications if undiagnosed. Common complications include pulmonary infarction, pulmonary edema, right ventricular failure, allograft failure; less common cases include limb ischemia & stroke from peripheral embolism, renal infarction .

Conclusions: The non-specificity of pulmonary vein thrombosis presentation poses a challenge to making early diagnosis. PVT should be borne in mind of clinicians in patient with risk factors as mortality depends on underlying etiology. Our case adds to existing literature of successful treatment with Warfarin.

IMAGE 1: Chest CT demonstrating a filling defect within the confluence of left lower pulmonary vein at the junction with the left atrium 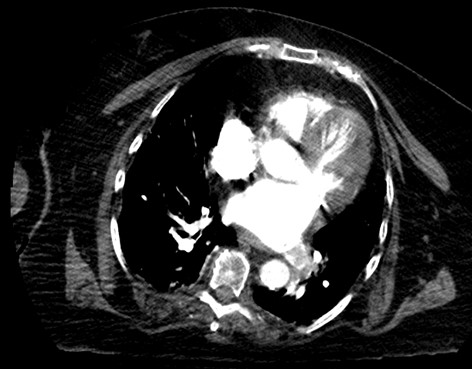 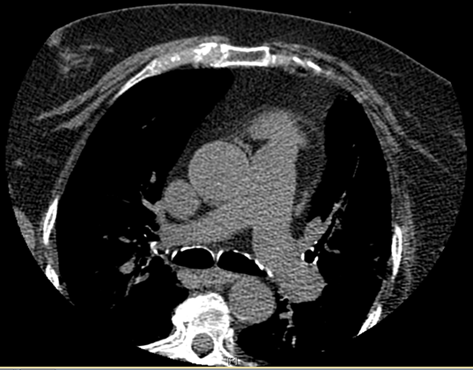