Case Presentation: A 67 year old woman presented to the emergency department with worsening shortness of breath. On admission the patient was hemodynamically stable, tachypneic and tachycardic, with desaturation to 80% on room air. She was found to have bilateral pulmonary infiltrates on chest x-ray and was started on antibiotics for pneumonia. It was noted on lab work that she had an elevated hemoglobin of 18.2 with an elevated creatinine level, so the patient was started on IV fluids for presumed hemoconcentration from dehydration and pre-renal kidney injury. Her symptoms worsened despite this therapy. A bed side ultrasound of her heart and lungs was performed.

Ultrasound images of our patient’s lungs showed numerous B-lines (Figure 2). B-lines are artifact seen as vertical rays coming down from the pleura on a lung ultrasound. They suggest fluid overload if seen diffusely. The diffuse nature of the B-lines with a smooth pleural line suggested pulmonary edema. An ultrasound of the heart showed an enlarged right ventricle. The left ventricle appeared to have normal function but it had taken on a D-shape configuration (parasternal short axis view) due to leftward bowing of the septum as a result of right sided pressure overload (Figure 1). Fluids were held and the patient was aggressively diuresed while being observed off antibiotics with improvement. This prompted further evaluation with a chest CT which showed honeycombing at the bases consistent with idiopathic pulmonary fibrosis (IPF).

Discussion: Use of bedside ultrasound was a very important adjunct in the clinical evaluation of this patient. It is becoming an integral part of internal medicine training for residents as well as faculty at our tertiary care hospital. The findings on ultrasound of the chest changed our management entirely in this case. The patient was presumed to have developed cor pulmonale due to worsening pulmonary hypertension as a result of IPF and long standing hypoxemia, which was also the cause of her elevated hemoglobin. She was given supplemental oxygen to prevent desaturation which would otherwise worsen pulmonary vascular resistance and hence right heart pressure. Her creatinine also decreased, likely attributing the initial kidney injury to renal congestion from decreased venous return. She was able to be discharged on supplemental oxygen and oral diuretics.

Conclusions: Point of care ultrasound is now in widespread use as a diagnostic modality in evaluating dyspnea, but most of the evidence behind its use comes from studies of patients in an emergency room or intensive care unit setting. It can be an invaluable tool to hospitalists because in addition to its ease of access and lack of exposure to radiation for the patient, it provides a wealth of information about hemodynamics and lung architecture in real time. We presented a case of a hospitalized patient who presented with shortness of breath, where bedside ultrasound changed the diagnosis and management. 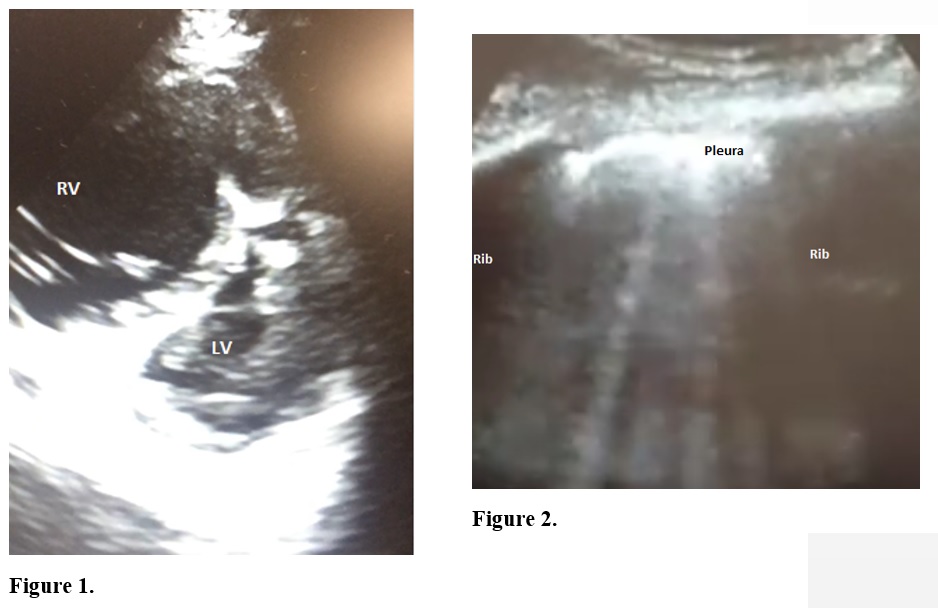