We performed a population‐based retrospective cohort analysis set between 1995 and 2010 within all 21 acute‐care adult general hospitals of a large metropolitan region. Participants were consecutive adults (>=18 years) emergently readmitted within 30 days of hospital discharge. The primary outcome measure was all‐cause mortality within 30 days of readmission.

A total of 198,149 patients were included, of whom 38,134 (19%) died within 30 days of readmission. Patients undergoing alternate‐hospital readmission were more likely to be older, reside in a chronic care facility and arrive by ambulance. Alternate‐hospital readmission was associated with a higher risk of death within 30 days (22% versus 19%; p<0.001; odds ratio 1.26; 95% confidence interval 1.23 — 1.30). The increased risk attenuated substantially after adjustment for patient‐ and hospital‐level covariates (adjusted odds ratio 1.06; 95% confidence interval 1.02 – 1.10). Unadjusted Kaplan‐Meier survival curves separated early and the absolute difference in mortality continued throughout the entire one‐year follow‐up period yet no difference between groups was observed on adjusted survival analyses.

Among patients readmitted within 30 days of discharge, alternate‐hospital readmission was associated with a higher risk of death than original‐hospital readmission. Whether this adverse prognosis reflects a true causal relationship or residual confounding is unknown. 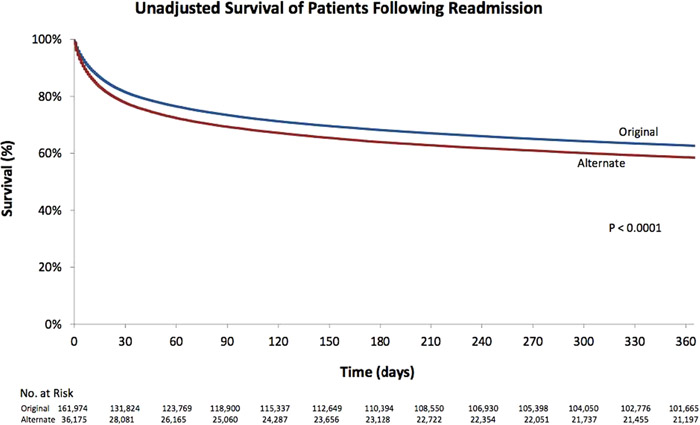