Several previous studies have documented lower initial survival in men than women following cardiac arrest, primarily in the out‐of‐hospital setting. However, the etiology of this discrepancy and its translation into the in‐hospital environment is unknown. One possibility, which is not well studied, is that there are discrepancies in cardiopulmonary resuscitation (CPR) quality between men and women. Women have been documented to have softer chests, requiring less elastic force in order to reach the same compression depth. We hypothesized that this would translate into deeper chest compressions in women during in‐hospital cardiac arrest.

We conducted a prospective study of consecutive, adult in‐hospital cardiac arrests at an academic medical center between April 2006 and February 2010. CPR quality was recorded using an accelerometer‐based, CPR‐recording defibrillator (MRX/QCPR, Philips Healthcare). Patient and arrest characteristics were abstracted by chart review. Only the first arrest for each patient was included if a patient suffered multiple events. Cases were excluded if CPR process data were not available. 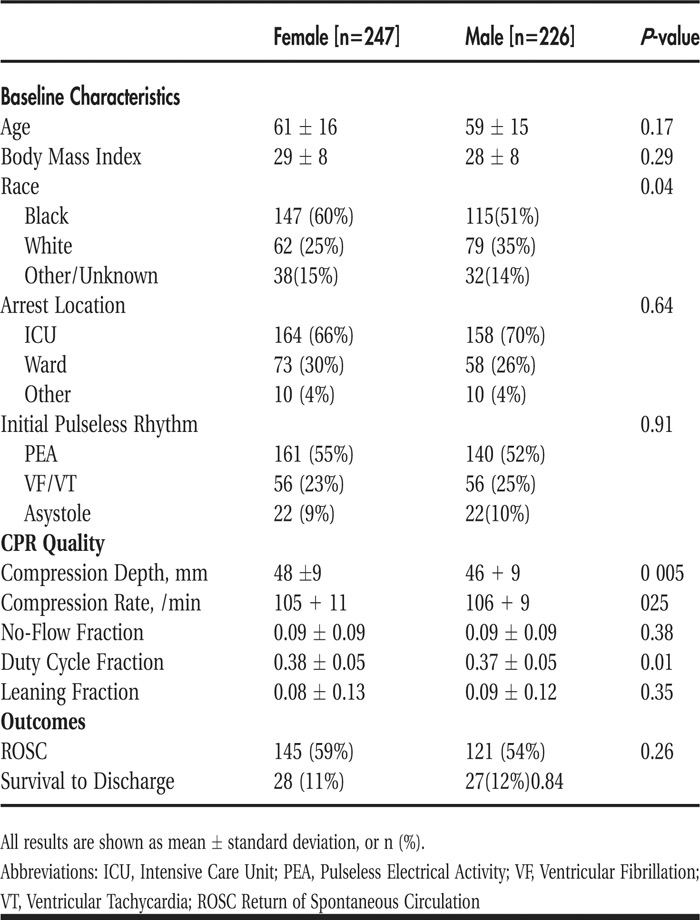 In this in‐hospital study of cardiac arrest, we found a trend toward improved short‐term outcomes in female patients but no difference in long‐term outcomes. This difference may be partially explained by the deeper chest compressions that women received compared with those received by men. Rescuers performing CPR in the hospital should be cognizant of sex difference in chest stiffness, which may require more force in male patients to achieve the same depth of chest compressions.