A 7‐year‐old Hispanic male presented to the emergency department (ED) with a 4‐day history of fever and worsening ankle pain and swelling. He was otherwise healthy prior to the onset of symptoms. The patient initially sought care for ankle pain and was placed on an antibiotic. The pain continued to worsen, and he complained of abdominal pain, myalgias, and difficulty breathing. On the day of presentation, he developed a vesiculopustular rash on the face that quickly generalized. In the ED, the patient was found to be hypotensive, hypoxemic, and have altered mental status. Laboratory studies revealed a normal white blood cell count with left shift, thrombocytopenia, acidosis, mild elevation of coagulation studies, positive D‐dimer, and hypoalbuminemia. On chest x‐ray, the patient had diffuse bilateral reticulonodular infiltrates. He was fluid‐resuscitated and placed on broad‐spectrum antibiotics including linezolid. An initial blood culture grew methicillin‐resistant Staphylococcus aureus (MRSA), along with a culture of a pustule from the face and a later tracheal aspirate culture. MRI revealed right tibial osteomyelitis, and a Doppler ultrasound showed right common femoral and popliteal deep vein thrombosis. Subsequently, the patient had increasing respiratory distress and was intuba‐ted in the PICU. His blood cultures remained positive for 7 days despite appropriate antibiotic coverage and operative debridement of the osteomyelitis. His additional complications included pleural effusion requiring chest tube placement, right hip septic arthritis, and femoral osteomyelitis. An echocardiogram was normal.

Severe staphy‐lococcal sepsis of the adolescent is a rare condition first reported by Shulman and Ayoub in the 1970s, prior to the widespread emergence of community‐acquired MRSA. It includes the constellation of severe septic shock, often with osteomyelitis or septic arthritis, pulmonary manifestations such as septic emboli and diffuse airspace disease, rash, and other organ involvement in otherwise healthy adolescents with no predisposing factors. Further molecular and genetic characterization of the staphylococcal isolates by Gonzalez et al. in 2005 demonstrated that the community‐acquired Staphylococcus aureus strains causing this condition were essentially the same as those causing less severe infections. They hypothesized that other factors—host immunity, hormonal factors, protein expression—must predispose these adolescents to severe infection. Our patient presented as a similar case of severe staphylococcal sepsis, but in a younger age group than previously reported.

Severe staphylococcal sepsis of the adolescent is demonstrated here in a previously healthy school‐age child, indicating that factors that predispose to this severe infection may not be unique to the adolescent population. 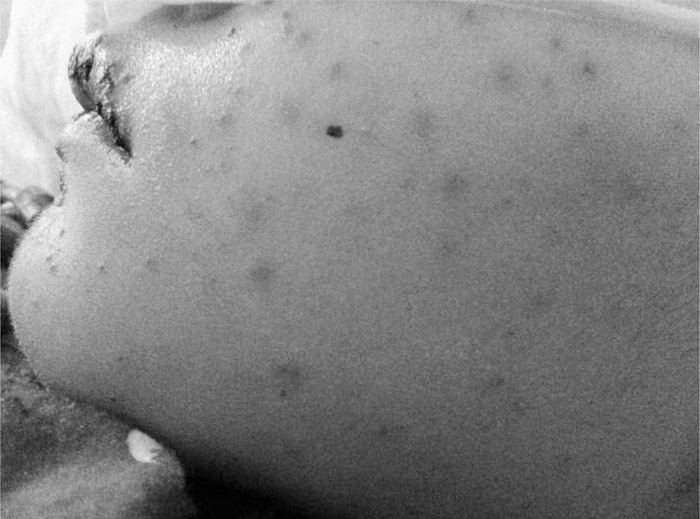