62 year old African American male with history of hidradenitis suppurutiva , hypertention and benign prostatic hypertrophy was transferred with c/o multiple abscesses and high grade fevers .They started as skin colored swellings with no redness and ruptured to ooze out non foul smelling pus.

On exam patient had multiple lesions involving face, scalp, extremities. Since he continued to spike fevers and have new lesions on broad spectrum antibiotics he was initially started on itraconazole which was changed to amphotericin after a bedside KOH was read as positive for fungal hyphae by infectious disease.

He underwent debridement of his lesions by ENT and was seen by OMFS and had a panorex performed to rule out tooth as source of infection. Every day abt 10 to 15 ml of pus could be expressed from both his cheek lesions. During his hospitalization he also developed lower GI bleed for which he had to undergo a colonoscopy and required blood transfusion. A small bowel obstruction also was noted presumed secondary to his underlying medical problems which resolved with conservative management.

Colonic biopsies showed crypt distortion active colitis with lyphoplasmocytic infiltrate with no granulomas. Skin biopsy clinched the diagnosis of Pyoderma gangrenosum which is related to crohns disease and he was started on oral prednisone and his antibiotics and antifungals were stopped. He also received 2 infusions of infliximab after he was discharged with clinical improvement and continues to do well with no recurrence of skin lesions or GI lesions.

Pyoderma gangrenosum (PG) was first described by Brunsting et al. in 1930 as a rare, neutrophilic ulcerative disorder of the skin. PG is a neutrophilic dermatosis, defined by a pathological abundance of neutrophils in the absence of infection and clinical signs of wound infections.

There are mainly 4 forms of PG including ulcerative or the classic form, bullous form, vegetative form and pustular PG. In 50 to 70% of the cases, PG is associated with an underlying disease such as IBD, inflammatory arthritis, haematological disorders, and solid malignancies.

Most common site of involvement is the lower extremity. Facial involvement is extremely rare. Incidence of PG varies between 3 and 10 patients per million, affecting slightly more women than men in the second through fifth decades.

While steroids still form the mainstay of therapy for PG, steroid sparing agents like cyclosporine, dapsone and newer biologicals have made a great impact on treatment. Treating the underlying disorder also controls the skin lesions.

Very rare for PG to be the presenting diagnosis when it is associated with underlying colitis. Even rarer is the pustural form with fever and leukocytosis. Our case illustrates an excellent opportunity for hospitalists to learn about a rare case of sepsis mimicker. Surgical debridement is not indicated in PG as it leads to pathergy but our patient underwent that for initial source control,again illustrating that this could have been avoided if the suspicion had been high. 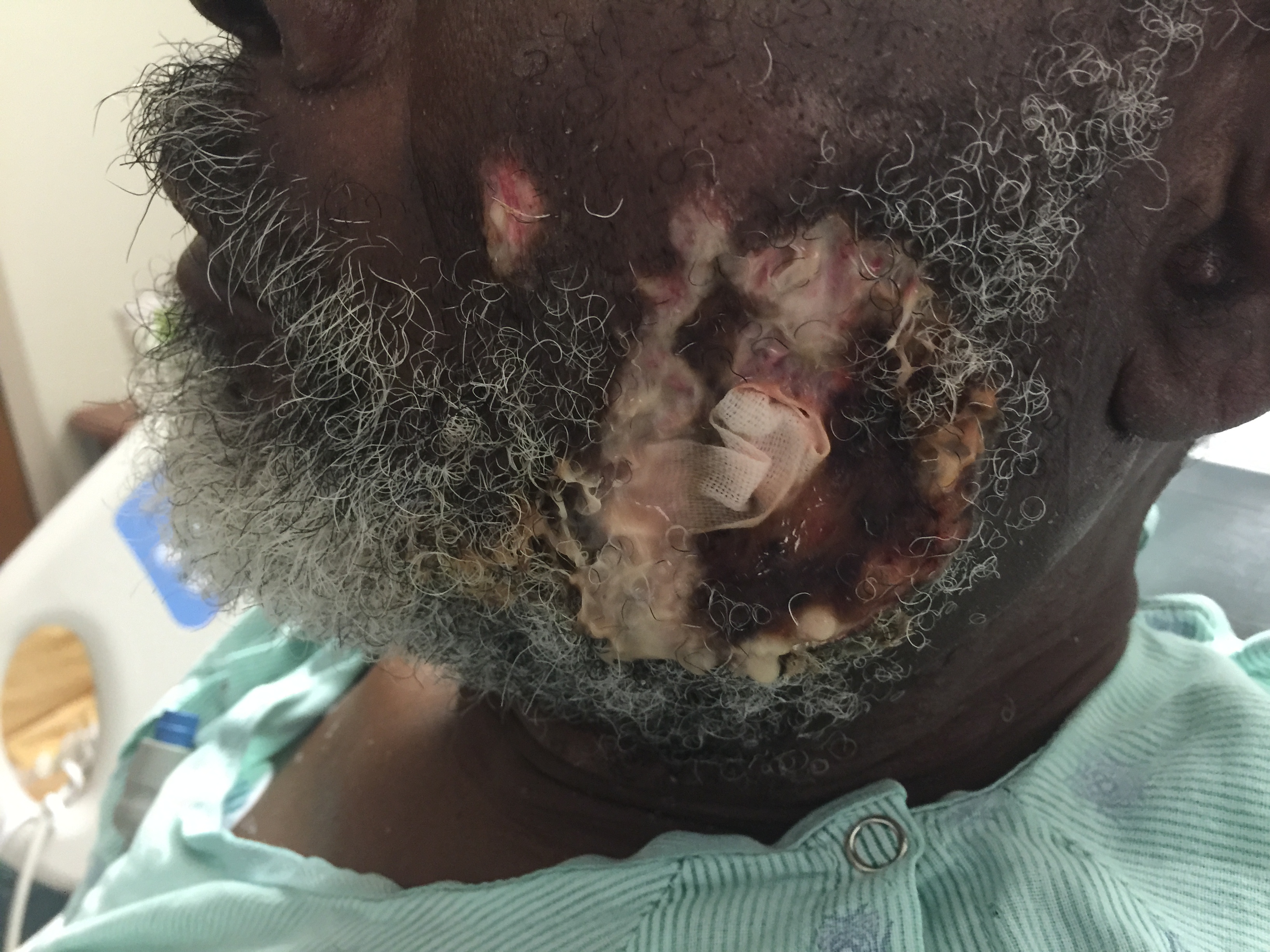