A 50 year‐old asplenic man with a history of hypertension presented with four days of nausea, vomiting and diarrhea and one day of lower extremity burning pain and numbness. Two days prior to admission he noted red spots on his upper thighs which became larger blotches on his feet and ankles followed by bluish discoloration of his third toe. Upon admission, he was afebrile, tachycardic at 125 with a blood pressure of 123/82. Physical examination demonstrated an ill man with a non‐blanching purple mottled rash on the legs and feet without neurologic deficit. Blood work revealed a creatinine of 4.8 mg/dl, white blood cell count of 40 with 36% bands, platelet count of 67, normal coagulation studies and lactic acid of 3.3.

He was admitted to the intensive care unit and started on broad spectrum antibiotics and intravenous fluids. Further investigation revealed a D‐dimer of > 10,000, fibrinogen of 959, negative anti‐cardiolipin antibodies and ANA < 1:40. A skin biopsy was compatible with disseminated intravascular coagulation and purpura fulminans without evidence of vasculitis. Extensive infectious evaluation did not reveal a specific pathogen as the etiology of his sepsis. The patient subsequently required a transmetatarsal amputation of the left foot, as well as amputation of his third and fifth toes on the right for treatment of gangrene.

Purpura is defined as visible hemorrhage into the skin or mucous membranes. It can be classified by size, palpability of the lesions and presence of the livedoid pattern. Retiform purpura results from occlusion in the vessels that cause the livedo reticularis pattern. What is observed clinically is hemorrhage into the skin around occluded dermal vessels resulting in a “puzzle‐piece” morphology.

Two major causes include vasculitis and microvascular occlusion syndromes which manifest as inflammatory or non‐inflammatory retiform purpura respectively. The major distinguishing factor between the two is palpability of the lesion; however, there is significant overlap clinically and often a biopsy is required for diagnosis. Microvascular occlusion syndromes can be caused by thrombotic, embolic or infectious phenomena. Some common etiologies include anti‐phospholipid antibody syndrome, calciphylaxis, warfarin necrosis, cholesterol emboli and disseminated intravascular coagulation (DIC).

DIC results from massive activation of the clotting cascade and manifests clinically with either bleeding or thrombosis. Purpura fulminans is a severe form of DIC which results in extensive areas of skin necrosis usually over the extremities and buttocks. It is most frequently found in the setting of sepsis, specifically with encapsulated organisms, placing asplenic patients at high risk.

Typical laboratory findings in DIC include elevated D‐dimer, prolonged clotting times, thrombocytopenia and low fibrinogen; however, the balance between thrombin generation, clotting factor depletion and thrombolysis can lead to variable results. In this case, the diagnosis of DIC was originally questioned given the elevated fibrinogen level, resulting in a delay in starting anticoagulation. Subsequent recognition of the clinical exam finding of purpura fulminans led to initiation of treatment with later pathologic confirmation on skin biopsy.

This case highlights the importance of recognizing the clinical exam finding of retiform purpura as this will guide the differential diagnosis of a patient with sepsis and a rash. 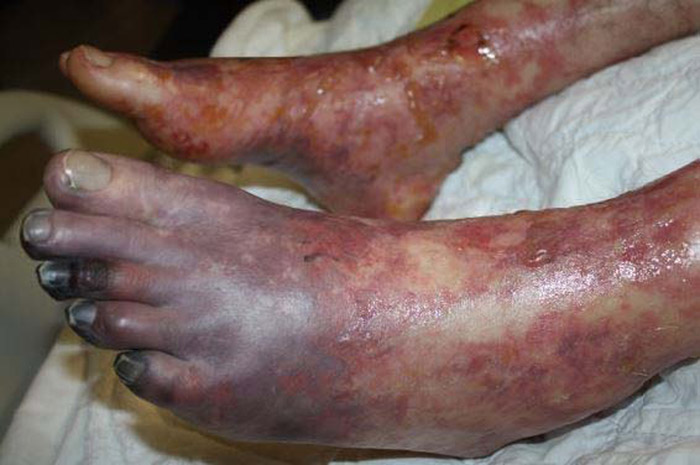