The relationship between functional status and outcomes following in‐hospital cardiac arrest is not well described. We hypothesized that decreased functional status would correlate with worse outcomes following in‐hospital cardiopulmonary resuscitation (CPR). We further theorized that this result would be mediated, at least in part, by less aggressive CPR efforts and increased use of do‐not‐attempt‐resuscitation orders (DNARs) immediately following successful CPR.

We conducted a retrospective study of adult cardiac arrests reported to the National Registry of CPR from 2000 to 2008, Patients were stratified on the basis of being dependence (CPC = 3) or independence (CPC = 1 or 2) in activities of daily living (DADLs or lADLs, respectively) as well as on nursing home status (NH), Primary outcomes were return of spontaneous circulation (ROSC) and survival to discharge after initial CPR event, Secondary outcomes included aggressiveness of resuscitation as measured by CPR duration, total doses of epinephrine or vasopressin, total shocks for patients with ventricular arrhythmias, and DNAR postarrest Two‐sided Student t tests were used for univariate analysis. Multiple logistic regressions were performed to adjust for potential confounders, including patient age, sex, race, illness category, and presence of a terminal illness as well as arrest time, location, monitoring and witness status, and initial rhythm, with results clustered by hospital.

A total of 38,572 cardiac arrests met inclusion criteria. Of those, 80% of patients were community‐dwelling lADLs, 11% community DADLs. 5% NH lADLs, and 4% NH DADLs. Average age was 67 years; 58% were male, 69% white, and 22% African American. The table on right shows the unadjusted outcomes by NH and functional status for both primary and secondary outcomes. After adjusting for potential confounders, NH DADL status corresponded with a significantly decreased odds of achieving ROSC compared with community lADLs (OR 0.87, 95% Cl 0.77. 0.96), and DADL status from both settings was associated with a decreased odds of survival [community OR 0,79 (0.69–0,92); NH OR 0.73 (0,60‐0.89)]. 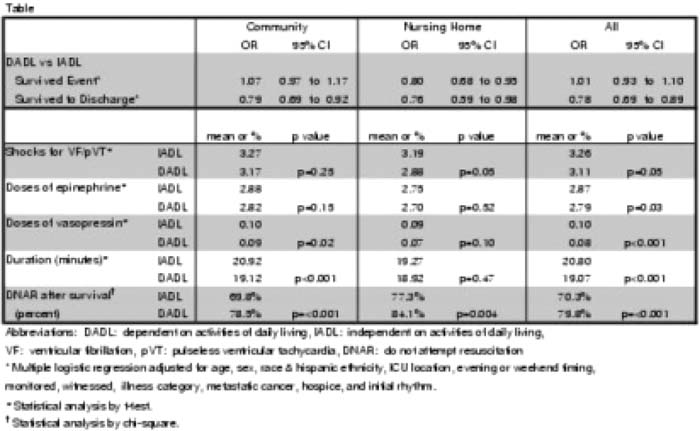 Functional status and nursing home status were important predictors of CPR outcomes. NH DADL patients were less likely to achieve ROSC, and all DADL patients were less likely to survive to discharge. NH DADL patients were associated with less aggressive attempts at resuscitation and with a high rate of DNR orders after event survival, all factors that appear to at least partially explain poorer outcomes. More research is also needed to understand whether prearrest neurologic status, and particularly dementia, is an independent predictor CPR outcomes because dementia leads to compromised functional status and frequent NH placement. However, given the poor outcomes in NH DADL patients, better advance care planning is needed for patients and families to understand the poor prognosis associated with CPR in this vulnerable population.