A 47‐year‐old woman with a history of psoriasis who had been on infliximab for more than 9 months presented with fevers, myalgias, worsening of her psoriatic rash, and painful swollen hand joints. She appeared uncomfortable but was afebrile and had a normal chest examination and heart sounds. She had diffuse erythema and telangiectasia on her face and erythematous psoriatic plaques on her trunk, thighs, and axillae. The metacarpophalangeal (MCP) and proximal and distal interphalangeal (PIP and DIP) joints in both hands were inflamed. She has a normal CBC and SMA‐7. Her ESR was 64. She had a facial rash that appeared different from her usual psoriatic rash. That she had responded quite well to the infliximab made refractory psoriasis unlikely. Hypersensitivity drug reaction and drug‐induced lupus erythematosus (DILE) were considered in view of the new findings and increasing joint inflammation. ANA level was 1:5120, and her anti‐dsDNA was 1:1280. She was seen by dermatology and rheumatology. Infliximab was discontinued. She was started on steroid creams and vitamin D analogues for psoriasis. In addition, she was started on systemic steroids for her DILE, which resulted in significant reduction in the severity of her inflamed joints. Methotrexate was considered as a agent to be used for her psoriasis, but she was noted to have transaminitis, with ALT and AST of 256 and 267, respectively. Hepatitis panel did not reveal any evidence acute or chronic viral hepatitis. Because of the potential hepatotoxic effect of methotrexate, rheumatology decided on continue with the steroid creams and vitamin D analogues for her psoriasis. She was asked to continue with the low‐dose systemic steroids for her DILE and to follow up with rheumatology.

Classic DILE is commonly associated with the use of procainamide, hydralazine, isoniazid, chlorpromazine, and quinidine. This condition is characterized by positive antihistone antibodies and negative anti‐dsDNA antibodies. DILE caused by anti‐TNF agents are commonly associated with hypocomplementemia. In addition to discontinuation of the offending medication, steroids may be required in severe cases as we was true for our patient. Clinical improvement occurs in weeks to months. Cases of DILE due to the use of anti‐TNF agents have been due mostly to infliximab. Very few cases have been due to etanercept and adalimumab.

DILE may be caused by medications used for treating collagen‐vascular diseases. This diagnosis requires a high index of suspicion, review of clinical history, and serologic data. The increasing use of anti‐TNF agents for dermatological, rheumatological, and many other conditions requires that hospitalists be aware of all the potential side effects of these medications. The cornerstone of treatment of DILE is the discontinuation of the culprit medication. This needs to be done as soon as possible to prevent worse outcomes. 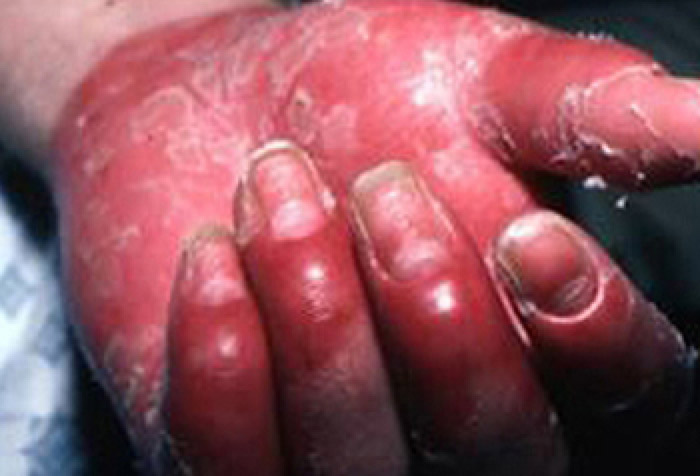