Case Presentation: 35 yo AAF, PMH of HTN, T2DM, TIA, and L internal carotid stenosis (ICA) on daily ASA presented to the ED with acute dysarthria and a stroke workup was initiated.  CT stroke showed a small hypodensity in the L centrum semiovale. MRI / MRA of the brain showed multiple small foci of acute/subacute to chronic infarcts throughout the L middle cerebral artery (MCA) territory with near complete occlusion of the L carotid terminus extending to the MCA consistent with possible Moyamoya disease (MMD). The patient underwent risk stratification for a cerebral angiogram, at which point the patient reported a history of sickle cell trait (SCT). However, her CBC with microcytic anemia, thrombocytopenia, with spherocytes, target cells, and schistocytes, was atypical for SCT. The patient admitted that SCT was a verbal, unconfirmed diagnosis. Due to potential risk of acute vaso-occlusive crisis with anesthesia, hematology sent a hemoglobin electrophoresis (HE), and the patient underwent cerebral angiography under local sedation.  The angiography showed 70% stenosis of the supraclinoid L ICA with tapering towards the carotid terminus, slow delay filling of the L MCA territory with a venous delay, no arteriovenous fistula, and the L MCA was actually supplied by the L PCA; right circulation was normal.  Findings were consistent with Suzuki Stage I MMD. Her HE revealed heterozygous hemoglobin C (HBC) with delta-beta-thalassemia. Ultimately, she had no other apparent risk factors for MMD and underwent a successful superficial temporal artery – MCA onlay bypass.

Discussion: MMD is a cerebrovascular disorder characterized by spontaneous progressive occlusive stenosis of the major intracranial arteries at the base of the brain with the formation of a fragile network of collaterals that resemble a “puff of smoke”; when associated with a known pathology such as sickle cell anemia, neurofibromatosis or cranial irradiation, it is termed Moyamoya syndrome (MMS).  First described by Suzuki and Takaku in 1969, incidence peaks in children and young adults and is more common in women and in Asians.  Clinical hallmark is recurrent cerebral ischemia and/or cerebral hemorrhages and patients may have headaches, seizures, or cognitive impairment. The pathogenesis remains unknown. One explanation is the “double hits hypothesis” where a stressor, such as infections, may trigger underlying gene abnormalities, leading to intimal thickening promoted by hemodynamic stress and repair factors, angiogenesis and thrombogenic factors. Sickle cell anemia is a well-established cause of MMS with crisis and endothelial injury leading to abnormal regulation of vasoconstriction, sclerosis, fibroblast and smooth muscle cell proliferation and intimal hyperplasia. Although MMS has been observed in mostly younger patients with sickle cell anemia and hereditary spherocytosis, it has not been reported in adults with heterozygous HBC and delta-beta-thalassemia.

Conclusions: To our knowledge, this is the first clinical presentation of adult-onset MMD in a patient with heterozygous HBC with delta-beta-thalassemia. Although, it is premature to propose an association, we report this to increase awareness of the potential relationship of MMD with other hemoglobinopathies.  In cases of MMD without identifiable risk factors, we propose considerations for screening at risk patients for hemoglobinopathies. 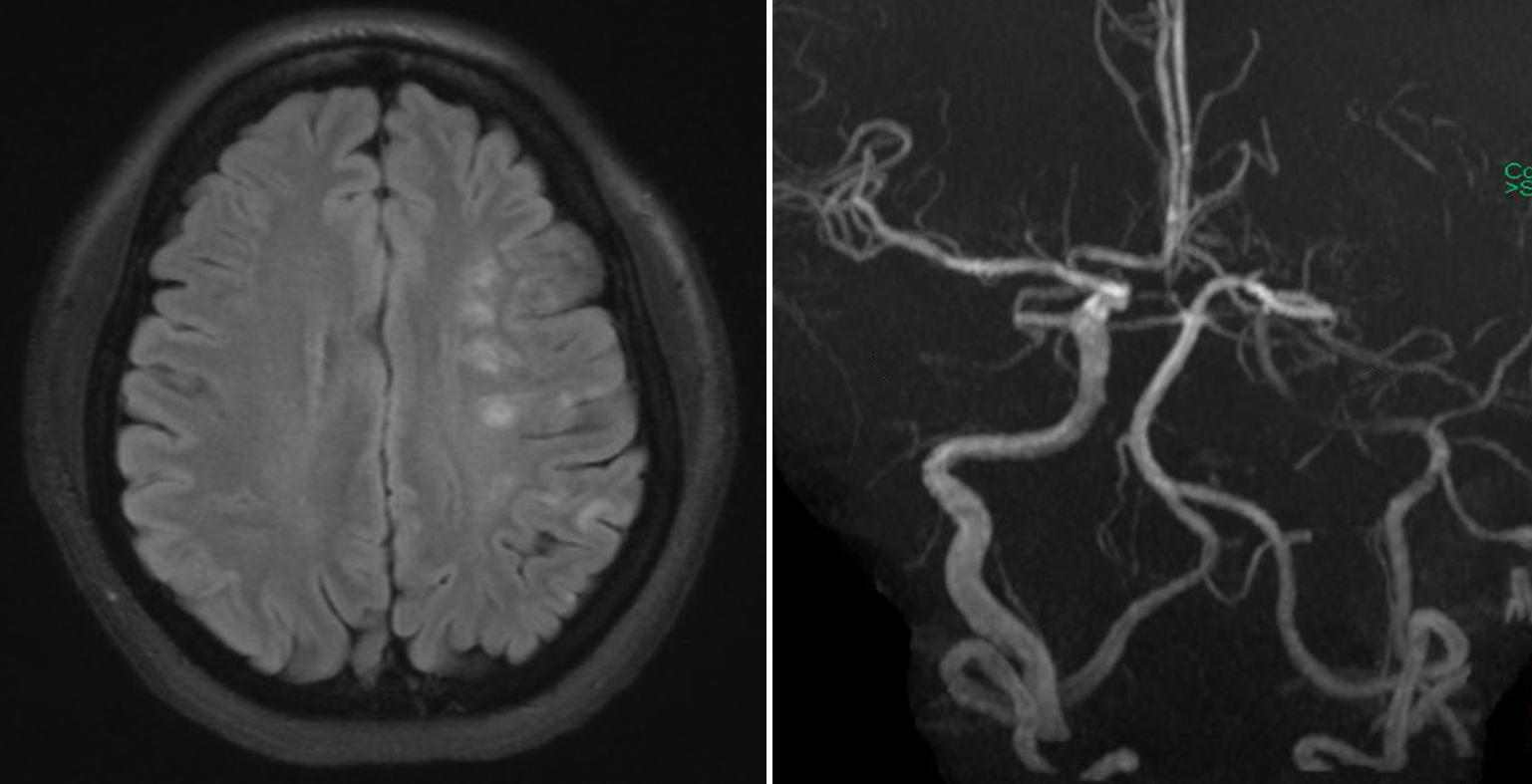