Case Presentation: A 53-year-old male with a history of coronary artery disease, chronic obstructive pulmonary disease (COPD) on 3 L oxygen and tobacco abuse presented to the emergency department of an outside hospital with complaints of hemoptysis and dysphagia to solids. He reported 2-3 teaspoons of hemoptysis daily for a few months but had been coughing up 1-2 ounces of blood for the past few days. Additionally, he admitted to hoarseness to his voice which began a year ago, “noisy breathing”, orthopnea, 20 pound weight loss and loss of appetite. Vitals and labs including complete blood count and chemistry were unremarkable. He was transferred to our hospital for interventional pulmonology evaluation. CT chest revealed multiple exophytic lesions within the trachea and both proximal bronchi with patent central airways. Bronchoscopy revealed papillomas over the vocal cords disrupting their normal structure as well as papillomas involving the mid trachea to distal trachea (Fig 2), carina and bilateral proximal mainstems (Fig 1). The rigid bronchoscope and forceps were used to perform mechanical debulking. Following this a cryoprobe was utilized for tumor ablation and a large part of the papillomas were removed with hemostasis achieved via scope tamponade. Endrotracheal lesion was biopsied and pathology showed squamous papillomas, positive for human papilloma virus (HPV) 6 or 11. Patient responded well to mechanical debulking during bronchoscopy and voiced decreased dysphagia after the procedure.

Discussion: Recurrent Respiratory Papillomatosis (RRP) is a condition in which benign growths known as papillomas grow within the respiratory tract. A manifestation of HPV, the prevalence of this condition varies with socioeconomic status but is often seen more in children. The incidence is only 1.2 per 100,000 in adults. RRP is most commonly a result of the human papilloma virus serotypes 6 and 11, the same serotypes responsible for condyloma accuminta and verruca vulgaris. Often transmitted to neonates during labor, patients can acquire it through sexual contact as well. Maintaining safe sexual activity and vaccination can significantly decrease the risk of acquiring HPV. Clinical course often includes multiple recurrences requiring excision. When the lower respiratory tract is involved, patients can develop obstruction, leading to pneumonia and respiratory failure. Rarely, malignant transformation and development of squamous cell carcinoma may occur. Risk factors for malignancy include multiple recurrences, smoking, alcohol consumption, irradiation and immunosuppression.

Conclusions: RRP is a less common complication of HPV but is however associated with increased morbidity. Surgical debridement remains the mainstay of therapy and patients are often subject to repeat procedure due to the tendency for the papillomas to return. The diagnosis should be included on a differential in a patient with promiscuous sexual habits, hemoptysis, new onset dysphagia and history of smoking. 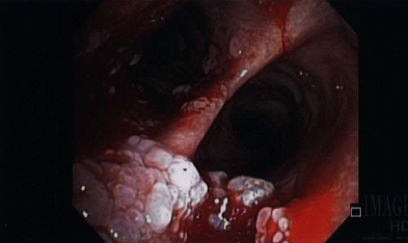 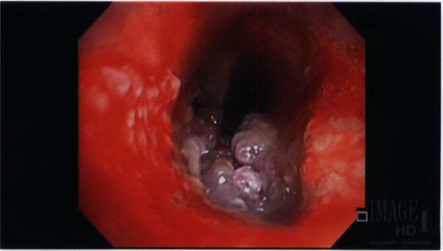