Background: Antipsychotics can prolong QTc interval and lead to development of the fatal arrhythmia Torsade de Pointes. Accordingly, serial EKG monitoring of QTc in patients newly started on antipsychotics has become common practice in hospitals. By current standards, medical management of antipsychotic therapy is clinically indicated when QTc > 500ms and/or there is an increase in QTc from baseline > 60ms. However, there are no evidence-based guidelines on how often EKGs should be ordered. As the cost of each EKG averages approximately $50, the elimination of wasteful ordering that does not result in clinical management changes could contribute greatly to value-based care. This research seeks to (1) clarify the utility of existing criteria for monitoring QTc in inpatients newly started on antipsychotics and (2) evaluate the impact of EKG frequency on management change.

Methods: We performed a retrospective chart review of patients who were admitted to the general medicine service at a large, urban academic medical center and were started on a new antipsychotic during their admission. Patients who had an EKG prior to first antipsychotic dose and at least one follow-up EKG were included. Patients with baseline non-sinus arrhythmia were excluded due to impact on QTc. Data on the baseline characteristics of the study cohort, as well as the number of EKGs obtained, changes in QTc, development of arrhythmias, and antipsychotic management changes for each patient, were captured. Descriptive analyses were performed. Fisher’s exact test, independent-samples t-test, and Mann-Whitney-Wilcoxon test were used to compare patients whose antipsychotics were changed based on follow-up EKG to their counterparts whose management was unchanged.

Results: One hundred and five patients were included in the analysis. Ten patients (9.5%) had a change in their antipsychotic regimen due to EKG findings, while 95 patients (90.5%) did not. Mean age was not significantly different between patients who had a change in antipsychotics and those who did not (74.7 years and 67.7 years, respectively; p = .09). Likewise, the presence of a baseline electrolyte abnormality did not differ significantly between the two groups (70.0% and 49.5%, respectively; p = .32). All 10 patients whose antipsychotics were changed due to EKG findings had a baseline QTc ≥ 460ms, thereby occurring at a significantly higher rate than the 40 patients whose antipsychotics were unchanged (42.1%; p < .001). The frequency at which EKGs were obtained (at least daily versus less frequently) was not associated with changes in management (p = .68).

Conclusions: None of the patients whose baseline QTc was < 460ms met criteria indicating management change, suggesting limited benefit in ordering additional EKGs when baseline QTc is below this cutoff. Additionally, no difference in management change was observed when EKGs were obtained at least daily versus less often. This suggests that less-than-daily EKG ordering may be a viable alternative to daily ordering without compromising patient safety. Further data would help to clarify the generalizability of these findings. 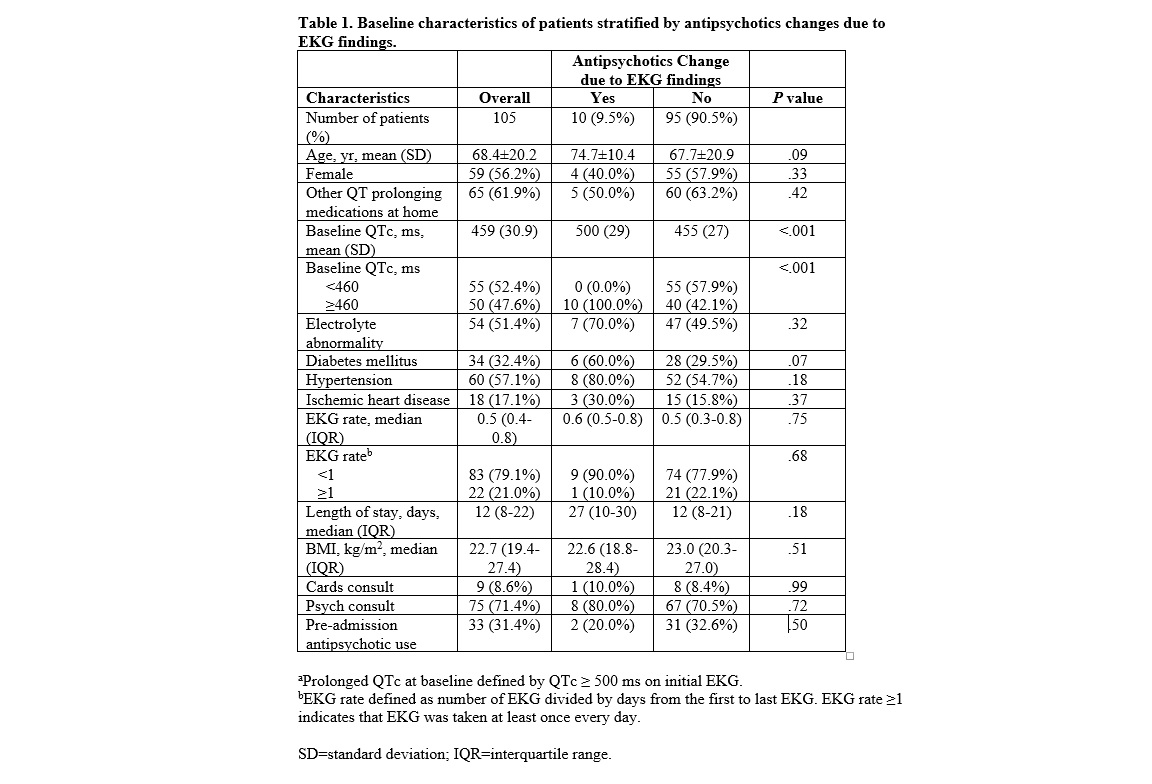