A 29‐year‐old Romanian male with history of aseptic meningitis complicated by cerebral venous thrombosis 1 year ago, presented with 3 days of recurrent fevers, chills and debilitating joint pain in his lower back, hips, knees and ankles. A salmon‐colored rash had also developed on his chest and back. He denied pulmonary symptoms and was a non‐smoker. He had strong family history of autoimmune disease with his mother dying from systemic lupus erythematosus at age 44 and an aunt with rheumatoid arthritis. Physical examination findings included a morbilliform, non‐pruritic rash over the torso. Lungs were clear to auscultation. Severe tenderness was noted in his knees and ankles without evidence of joint swelling. Chest radiograph revealed mild interstitial infiltrates. Despite an exhaustive diagnostic evaluation for inflammatory and infectious causes, no etiology was identified. Fevers and severe arthralgias continued, requiring frequent opiates. Joint imaging was unremarkable and transesophageal echocardiogram revealed no evidence of endocarditis. Surprisingly, a whole‐body gallium scan showed diffuse uptake in both lungs and a chest and abdomen CT demonstrated diffuse pinpoint, randomly distributed pulmonary micronodules (Figure 1). Spirometry was normal. He was unable to tolerate bronchoscopy due to intractable pain and a surgical lung biopsy was performed on day 34, which revealed abundant polarizable, pale yellow foreign material within numerous granulomas in a perivascular distribution, confirming intravenous injection of talc (arrows, Figure 2). Fevers subsided once intravenous access was removed. When confronted, the patient adamantly denied intravenous drug use (IVDU) and was ultimately lost to follow up.

Pulmonary talc granulomatosis (PTG) is a rare but well‐described granulomatous lung disease in intravenous drug abusers, resulting from injection of crushed talc‐containing oral medications, such as opiates and amphetamines. PTG is characterized by an intense foreign‐body granulomatous response caused by deposition of talc in the pulmonary vasculature. Perivascular granulomas containing polarizable talc crystals confirm the diagnosis. Its course is progressive, eventually leading to irreversible pulmonary hypertension, fibrosis and emphysema. The diagnosis is often missed due to early subclinical disease manifesting as asymptomatic pulmonary nodules. There is no known treatment other than cessation of IVDU. This case is unique as fever, rash and polyarthralgia dominated the presentation, obscuring ongoing IVDU. Systemic embolization of talc, which can occur due to its small particle size, may provide an explanation for his presentation. To our knowledge, only one other case of PTG associated with musculoskeletal symptoms has been described.

We report a unique case of PTG presenting as a febrile musculoskeletal syndrome. This case highlights the variable presentation and diagnostic challenge of PTG 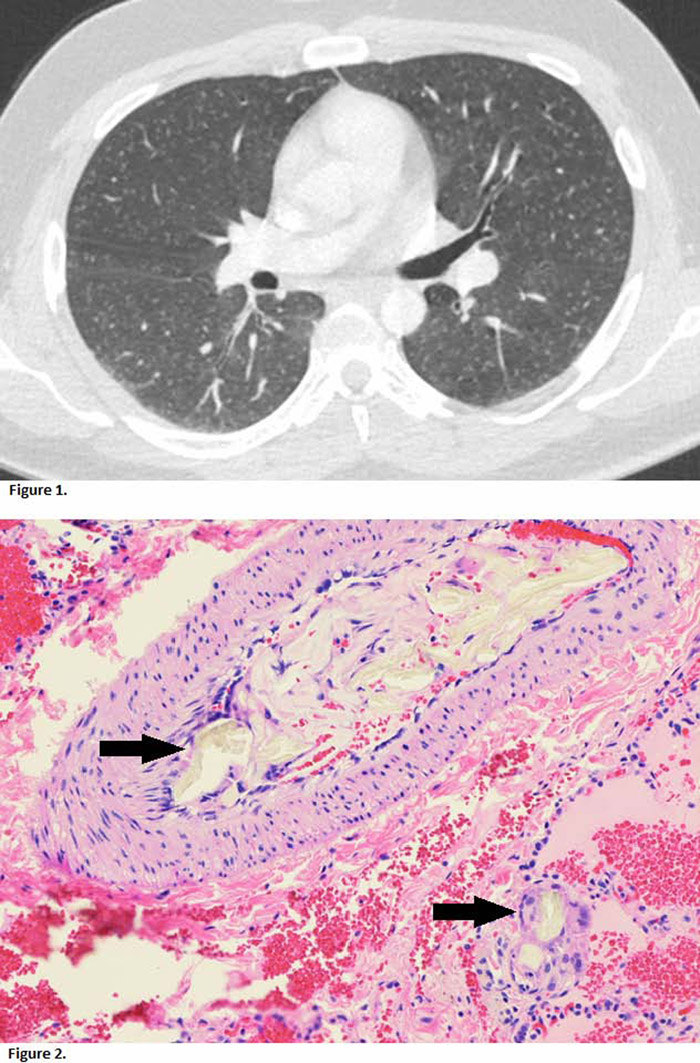