Background: Increased Emergency Department (ED) boarding times have been linked to increased patient length of stay, increased mortality and lower patient satisfaction scores. Discharging hospitalized patients earlier in the day has been proposed as one way to reduce ED boarding times and improve hospital patient flow.  To our knowledge, barriers preventing earlier discharge have not been well studied.

Methods: We performed a multisite cross-sectional study to identify and determine the frequency of barriers to earlier hospital discharges.  A series of three surveys was administered on study dates in the early morning, late morning and mid-afternoon to general medicine ward providers at five academic hospitals. Study dates were selected in advance based on investigator availability. Providers were asked to determine if patients were a “possible” discharge defined as having unresolved issues requiring attention before discharge was possible. All unresolved issues were recorded.  Providers were resurveyed two additional times that day evaluating the status of unresolved issues. Endpoints were definite discharge (patient ready to be discharged) or continued possible discharge at last survey. Factors which led to each endpoint were collected along with basic provider and patient characteristics

Results: From August 14, 2014 to May 31, 2016, a total of 564 definite and 187 possible discharges were identified.  Hospital, provider and patient characteristics are described in Table 1.  Average survey times were 8:36 am, 12:00 pm and 3:36 pm. Of the possible discharges that subsequently discharged, the most common unresolved issues were: (1) need for clinical improvement before discharge, (2) providers needing to evaluate or staff patients and (3) social work issues. For patients who remained a possible discharge at the time of last survey, the most common unresolved issues were: (1) social work issues, (2) awaiting consultant recommendations and (3) awaiting procedures (Table 2).

Conclusions: We identified multiple barriers to early hospital discharge, several of which may be amendable to quality improvement projects. 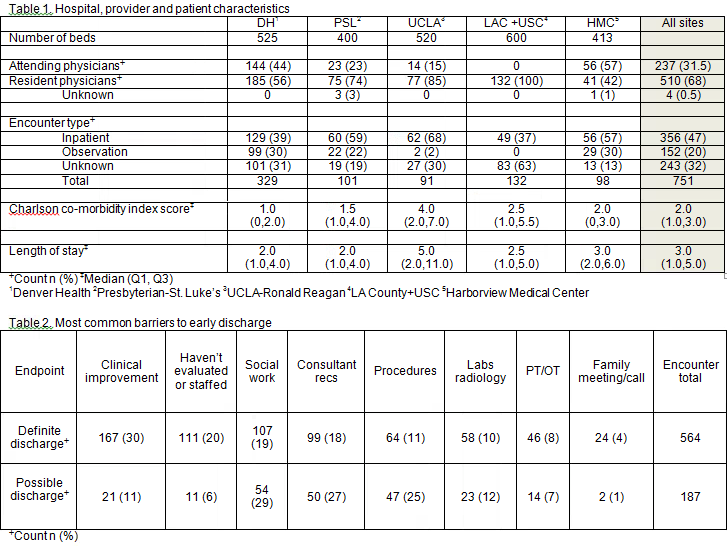