Sepsis is a major cause of death in hospitalized patients. The preferred setting to care for patients with sepsis is the medical intensive care unit (MICU). However if the MICU is full, patients are admitted to overflow units. Protocols for management of sepsis patients that include specific pro‐cess‐of‐care interventions are associated with better outcomes. We hypothesized that process‐of‐care interventions are more strictly adhered to when sepsis patients are in the MICU. 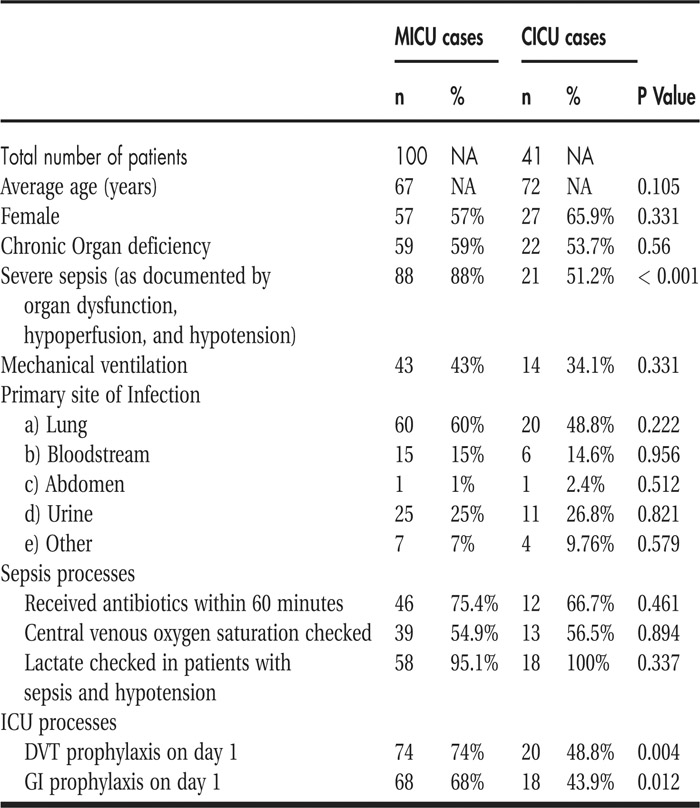 All patients admitted with a possible diagnosis of sepsis between July 2009 and January 2010 to either the MICU or the overflow cardiac intensive care unit (CICU) were identified by querying hospital databases using key words that included pneumonia, sepsis, hypotension, high lactate, hypoxia, UTI/urosepsis, SIRS, hypothermia, and respiratory failure. The electronic medical record (EMR) and patient charts were reviewed, and patients with sepsis were identified using published objective criteria. A standardized data extraction instrument was used to characterize the process‐of‐care interventions via a systematic review of the patient charts and EMR. The chi‐square test was used to compare the patient care interventions in the MICU and the CICU.

A total of 197 patients were identified from the electronic databases, and 141 patients were identified to have sepsis based on objective criteria. One hundred patients were admitted to the MICU, and 41 patients were admitted to the CICU in the study period. Age and sex distributions were comparable in the 2 groups (both P > 0.05). The MICU patients had a higher proportion of patients (88% vs. 51%; P < 0.001) with severe sepsis (sepsis patients with documented organ dysfunction, hypoperfusion, or hypotension). There were no significant differences between the groups in percentage of patients with mechanical ventilation, chronic organ deficiency, and primary site of infection. There were no significant differences in process‐of‐care interventions in the categories of percent of patients receiving antibiotics within 60 minutes (75.45% vs. 66.7%), percentage with central venous oxygen saturation checked (54.9% vs. 56.5%), and percentage with lactate level checked (95.1% vs. 100%). The MICU had a significantly higher proportion of patients who received DVT prophylaxis on day 1 (74% vs. 48.8%; P = 0.004) and gastrointestinal (GI) prophylaxis on day 1 (68% vs. 43.9%; P = 0.012).

In the study period, the MICU had a higher proportion of patients with severe sepsis. There were no significant differences in the measured process‐of‐care interventions in the MICU versus CICU except in the categories of DVT and GI prophylaxes on day 1, which were better adhered to in the MICU.