Background: Clinicians encounter sudden death among aortic stenosis (AS) patients especially after they become symptomatic. Mortality is 50% at 1 year and 70 to 80% at 2 years without aortic valve replacement. However, there have been few studies that investigate the predictor for short-term sudden cardiac arrest in patients with severe AS. We investigated the frequency and predictors of short-term cardiac arrest among severe AS patients.

Methods: We conducted a case control study by obtaining data through a retrospective comprehensive chart review. Patients were included if they were admitted to our internal medicine units with primary diagnosis with severe AS defined by aortic valve area (AVA)<1 cm2 by transthoracic echocardiography before surgical treatment through 2013 January to 2016 May. A set of hospitalized patients with severe AS who had an episode of cardiac arrest within 30 days after admission were compared with those who did not. Their demographic data (age, sex and comorbidities), symptoms and exercise tolerance related to AS, laboratory data on admission as well as transthoracic echocardiographic findings were collected. Univariate analysis by Fisher’s exact test and multivariate logistic regression analysis were used for the evaluation of risk factor for 30-day cardiac arrest among severe AS patients.

Results: The number of patients was 137 and 20 patients (14.6%) had episode of cardiac arrest within 30 days after admission. The univariate analysis demonstrated that the presence of symptoms with minimal exertion (walking in the house, on standing or at rest), AVA<0.6 cm2 and Left ventricular ejection fraction<40% were associated with 30-day cardiac arrest. Multivariate logistic regression analysis demonstrated that AVA<0.6 cm2 and presence of symptoms with minimal exertion were significantly associated with 30-day cardiac arrest.

Conclusions: Severe AS patients with AVA<0.6 cm2 or presence of symptoms with minimal exertion have a risk of short term cardiac arrest during hospitalization. We need to consider early treatment with aortic valve replacement or transcutaneous aortic valve implantation for the patients with these factors and restrict their activity to prevent cardiac arrest. 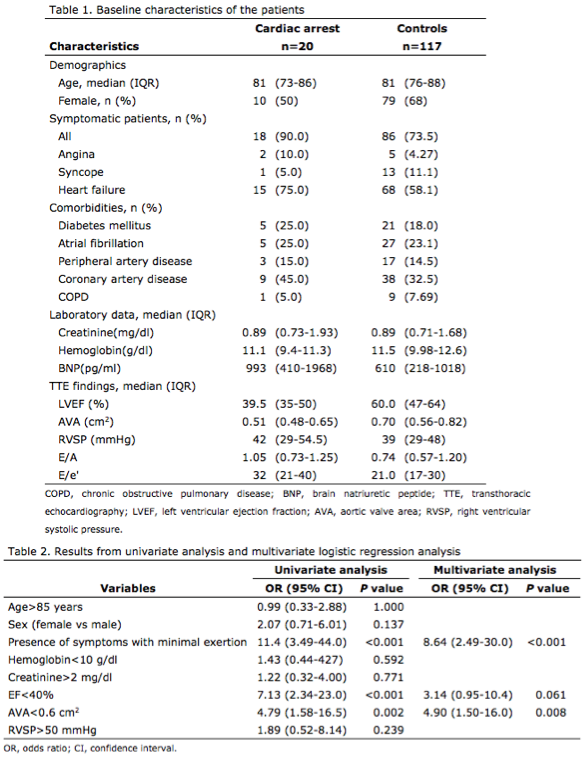