The Vulnerable Elders Survey (VES‐13) was developed to identify community dwelling elders at risk for functional decline or death. It consists of a 10‐point score based on age, self‐reported health status, and ability to perform 6 physical tasks and 5 activities of daily living. In the outpatient setting it has been shown to predict increased risk of functional decline, nursing home placement, and death. The VES‐13 has not been evaluated for use in the inpatient setting. We examined whether VES‐13 scores in older patients following admission to the hospital are associated with discharge to a skilled nursing facility (SNF).

The study was a retrospective evaluation of patients > 65 years old admitted to the University of Colorado Hospital's Acute Care for the Efderly Service between September 2007 and May 2008. Exclusion criteria included: residence in a nursing home, death, or transfer to another hospital. We compared VES‐13 scores for patients discharged to an SNF versus home using the Wilcoxon rank sum test and used logistic regression to relate the VES‐13 score to discharge location. We evaluated the performance of 4 cut points of the VES‐13 score for their ability to predict discharge to an SNF. 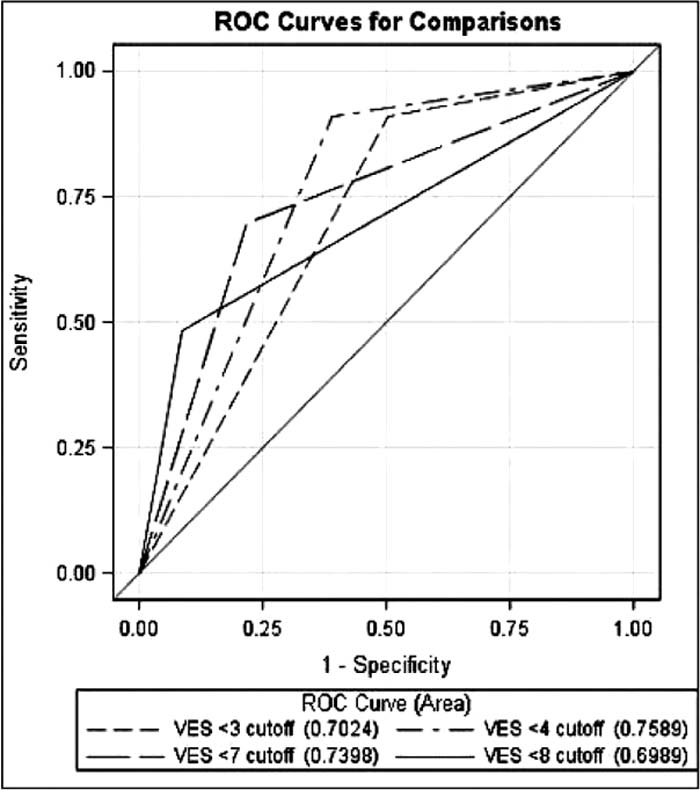 This study demonstrates that the VES‐13 identifies vulnerable elderly patients at high risk for discharge to an SNF after hospitalization. Recognition of patients with a high probability of need for rehabilitation based on admission functional characteristics allows the hospital physician to anticipate the potential need for placement earlier in a hospital stay and to identify barriers to successful transitions.