Case Presentation: A 43-year-old Caucasian woman with stage IV rectal adenocarcinoma metastatic to liver and lung presented with new onset generalized tonic clonic seizures. She was receiving her second line treatment with 5-FU continuous infusion Day number 7 of 7 of the 5th cycle. This was preceded by confusion and altered mentation since the previous day. Initial BP was 151/109 mmHg and physical exam was remarkable for ongoing generalized convulsions. Labs revealed normoglycemia with creatinine elevation of 1.3 mg/dl, mild hypercalcemia and mild hypomagnesemia. IV Lorazepam and IV Phenytoin failed to control seizures necessitating intubation and initiation of Propofol drip. MRI brain showed bilateral multifocal cortical and subcortical T2/FLAIR hyperintense signal in occipital lobes suggestive of Posterior Reversible Encephalopathy Syndrome (PRES). There was no evidence of intracranial mass, infarction or hemorrhage. EEG on Day 2 of hospitalization (while propofol was turned off) showed burst suppression pattern. Patient was noted to have right arm twitching requiring propofol to be re-initiated. Lumbar puncture was performed and CSF analysis revealed normal cell count and cytology. On Day 3, EEG showed cessation of seizure activity, thus propofol was discontinued, patient was extubated and discharged to the inpatient rehabilitation unit. N-methyl-D-Aspartate (NMDA)receptor antibodies were found to be negative. Repeat MRI brain after 8 days showed resolution of prior abnormalities.

Discussion: Although PRES commonly presents as seizures, Status Epilepticus (SE) is reported to be an initial presentation in only 14% of PRES cases. The most common etiology of PRES is severe hypertension, but our patient was only borderline hypertensive making it less likely as a causative factor. PRES associated with chemotherapy is reported to have an incidence of 0.02 to 0.1 %, generally associated with Bevacizumab. 5-Fluorouracil (5-FU) associated cerebral toxicity is rare, presenting as multifocal inflammatory leukoencephalopathy which is distinct from PRES. Interestingly only posterior circulation is involved because of poor sympathetic adrenergic innervation to vertebral basilar system. Thus, PRES risk factors including fluid overload, increment of mean BP 25% above baseline and creatinine greater than 1.8mg/dl which were absent in our case, hence, favoring 5-FU as a likely etiology.

Conclusions: PRES has been described to occur as a complication to chemotherapy. Further, it is important to recognize that isolated use of 5-FU may present as SE and PRES. Our case also highlights the significance of recognizing confusion and lethargy as early signs of PRES so that subsequent comorbidity can be prevented. Once PRES diagnosis is confirmed it is important to evaluate for autoimmune causes such as presence of NMDA receptor antibodies.

IMAGE 1: MRI Brain with contrast with PRES highlighted by arrow 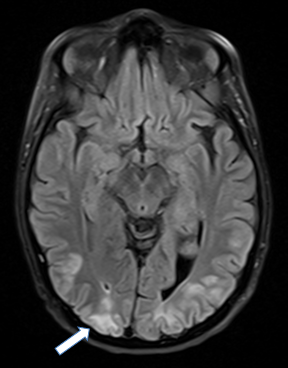