Background: Moral distress, the inability to act in accordance with one’s ethical beliefs due to hierarchical or institutional constraints, has been associated with burnout and poorer well-being.  Significant moral distress amongst American physician trainees might occur when they feel obligated to provide treatments at the end of life that they believe to be futile or harmful. Policies in the United Kingdom permit physicians to make a decision to withhold or abort resuscitation that they believe would be inappropriate or ineffective following discussions with the family. The aim of this study was to explore whether moral distress surrounding resuscitation at the end of life occurred in the UK, a country whose health policies surrounding end of life care are notably different than those in the United States.

Methods: We conducted semi-structured in-depth interviews with 14 junior doctors (equivalent of residents and fellows) in the UK regarding moral distress and attitudes surrounding do-not-resuscitate (DNR) decision-making. Interviews, which were audio-taped and professionally transcribed, lasted an average of 60 minutes. Transcripts were analyzed and double coded using thematic analysis. Themes and patterns emerged from initial interviews and analysis, and were refined and validated in subsequent interviews through questions added to the interview guide and probing of key themes during the interviews.

Results: UK trainees infrequently experienced feelings of ethical conflict surrounding resuscitation, though some respondents did note one or two rare but notable cases of resuscitation they felt were inappropriate. Themes that arose included a feeling of shared attitudes around providing care that was in a patient’s best interest. Please see Table 1 for example quotations of UK junior doctors. Distress instead appeared to arise from other areas such as insufficient resources or personnel to provide optimal care and a lack of control over the nature of their work.

Conclusions: Taken together with the US data previously described in Dzeng, et al., 2016, we describe different degrees of moral distress and distress surrounding potentially futile care and resuscitation at the end of life between US and UK trainees. We hypothesize that UK policies and culture allow physicians to withhold inappropriate or ineffective resuscitation, allowing physicians to act in ways that are in accordance with their ethical beliefs. Different policies surrounding resuscitation at the end of life in the US and UK might contribute to different degrees of moral distress amongst physician trainees regarding potentially futile treatments at the end of life. 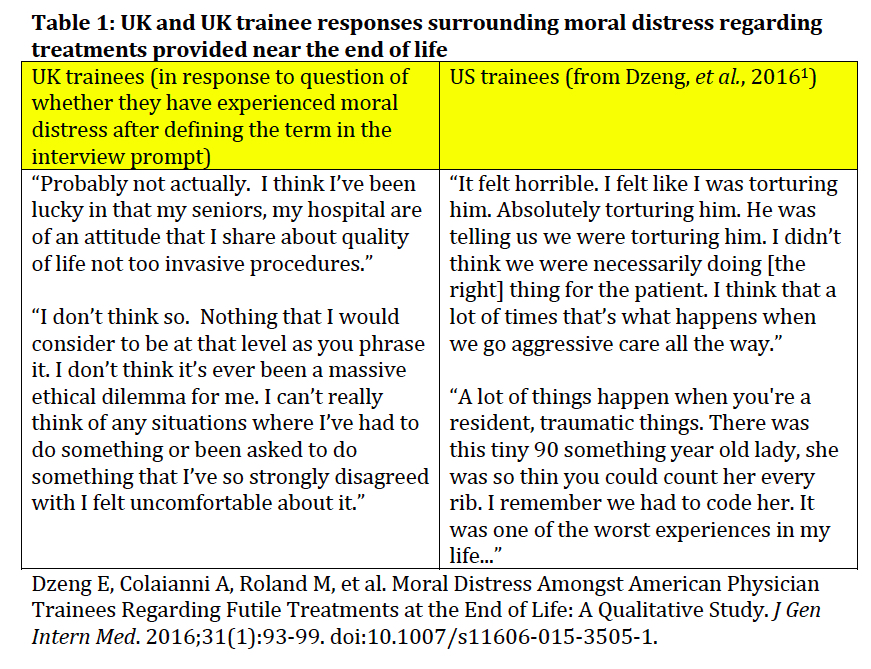