Initial workup suggested leucocytosis (WBC 11000 K/uL), elevate lipase level (204 U/L) with normal total bilirubin (0.4 mg/dL) and LFTs. An abdominal ultrasound showed dilated CBD (9 mm) without evidence of gallstone. A subsequent MRCP and CT scan revealed a suspicious 4.5×4 cm mass near the head of pancreas containing air-bubbles  with adjacent fat inflammation, suggesting either an abscess or necrotic tumor but no clear consensus. The patient developed high grade fever (up to 102 F) and her pancreatic lipase increased to >9000. She was started on broad spectrum antibiotics.

Repeat imaging suggested evidence of an evolving inflamed impacted periampullary duodenal diverticulum which was the most likely cause of pancreatitis secondary to external compression of common bile duct and pancreatic duct. The patient improved clinically and lipase level also trended down after the initiation of antibiotics.

Four weeks later, a repeat CT scan showed interval decompression of the previously dilated and inflamed duodenal diverticulum with minimal remaining surrounding stranding. The patient also underwent an EGD with diagnostic EUS that showed a periampullary diverticulum in the second portion of the duodenum while imaging of the pancreatic neck, body, and tail showed normal parenchyma with no solid or cystic lesions.

Following colon, duodenum is the most common site of diverticulum formation. Periampullary diverticulae (PAD) are duodenal diverticulae arising within a radius of 2-3 cm from the ampulla of Vater. PAD remain asymptomatic and complications are responsible for presentation in most cases. Compression of CBD, dysfunction of the ampulla or a poorly emptying diverticulum with a narrow neck can all lead to pancreatico-biliary disease and possible pancreatitis.

Initial evaluation fails to detect the cause of acute pancreatitis in up to 30% of patients. Hence diagnosis of this condition requires high degree of suspicion and appropriate abdominal imaging especially in cases refractory to conservative treatment and without other identifiable cause. Although duodenal diverticulitis is a rare cause of pancreatitis, early diagnosis and treatment is crucial due to associated high morbidity and mortality. 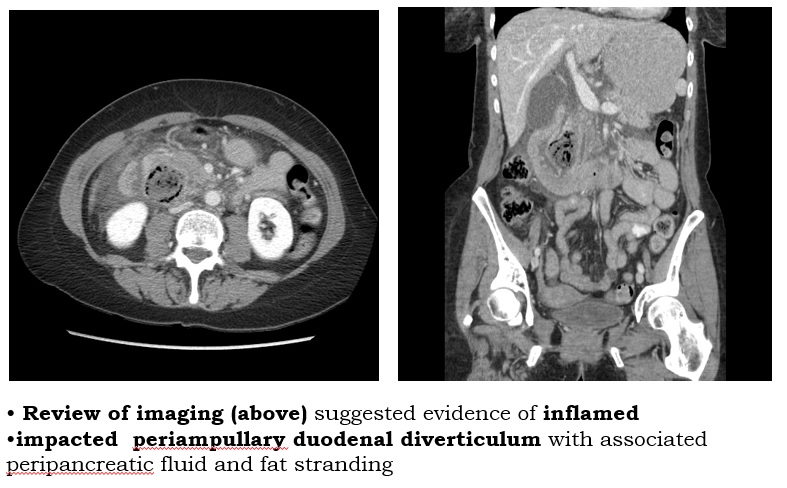