A 41 year old male with a twenty year history of alcohol abuse presented to the emergency room with a chief complaint of abdominal pain and increasing abdominal girth over one year. His gastroenterologist had been medically managing his symptoms with furosemide and spironolactone for presumed alcohol‐induced cirrhosis. Initial exam in the emergency room revealed fever, tachycardia, significant abdominal distension, abdominal pain and positive fluid shift. Blood work showed a neutrophil‐predominant leukocytosis. Subsequently, a 2 liter diagnostic and therapeutic paracentesis confirmed spontaneous bacterial peritonitis. He was started on intravenous antibiotics and admitted to the medicine ward. However, his pain was out of proportion to exam, his ascites reaccumulated quickly, and his fever and leukocytosis persisted. A second paracentesis was performed, removing 7 more liters of fluid with cultures that grew Pseudomonas aeruginosa. The antibiotic spectrum was broadened but without any clinical improvement. MRI and CT of the abdomen were then performed to look for an alternate source of infection. These studies demonstrated evidence of chronic pancreatitis, a cystic lesion in the pancreatic tail, two complex cysts in the pancreatic head, and loculated complex ascites consistent with peritonitis. There was no evidence of cirrhosis as initially presumed. Peritoneal fluid also demonstrated a peritoneal lipase of 180,000 U/L and peritoneal amylase of 32,000 U/L (serum amylase was 58 U/L). Gastroenterology was consulted and performed an endoscopic retrograde cholangiopancreatography (ERCP) revealing a pancreatic duct stricture and leak (pancreatic fistula) in the tail of the pancreas. A pancreatic stent (8.5 Fr x 14cm) was placed across the stricture with subsequent improvement in the patient’s ascites. He was discharged several days later without any diuretics and encouraged to abstain from alcohol. The patient returned six months later and was found to be ascites‐free. He had a repeat ERCP to remove the pancreatic stent and remains asymptomatic.

A pancreatic fistula (PF) is an abnormal connection between the pancreas and adjacent organs, structures or spaces. The main cause of a PF is leakage of pancreatic secretions from disrupted pancreatic ducts, most commonly a complication of chronic pancreatitis. PF’s are associated with significant morbidity as they can cause malnutrition, ascites and infections. As seen in this case, the patient was prone to recurrent episodes of spontaneous bacterial peritonitis and rapid fluid reaccumulation with superimposed malnutrition. A fluid amylase level greater then five times the serum amylase is the hallmark of PF; and ERCP is the diagnostic tool of choice as it can visualize contrast filling the pancreatic duct and extravasating in the presence of a PF. ERCP is also the therapeutic tool of choice as placement of pancreatic stents has the potential to decompress the main pancreatic duct and facilitate drainage of the pancreatic secretions. The dual nature of ERCP is illustrated in this case as it was both the diagnostic and therapeutic modality responsible for the patient’s clinical improvement.

Ascites is commonly seen in patient with alcoholic cirrhosis. However, when a patient’s condition does not improve with conventional therapy, an alternative differential diagnosis should be explored. Early recognition and diagnosis of a PF is imperative to decrease both morbidity and mortality 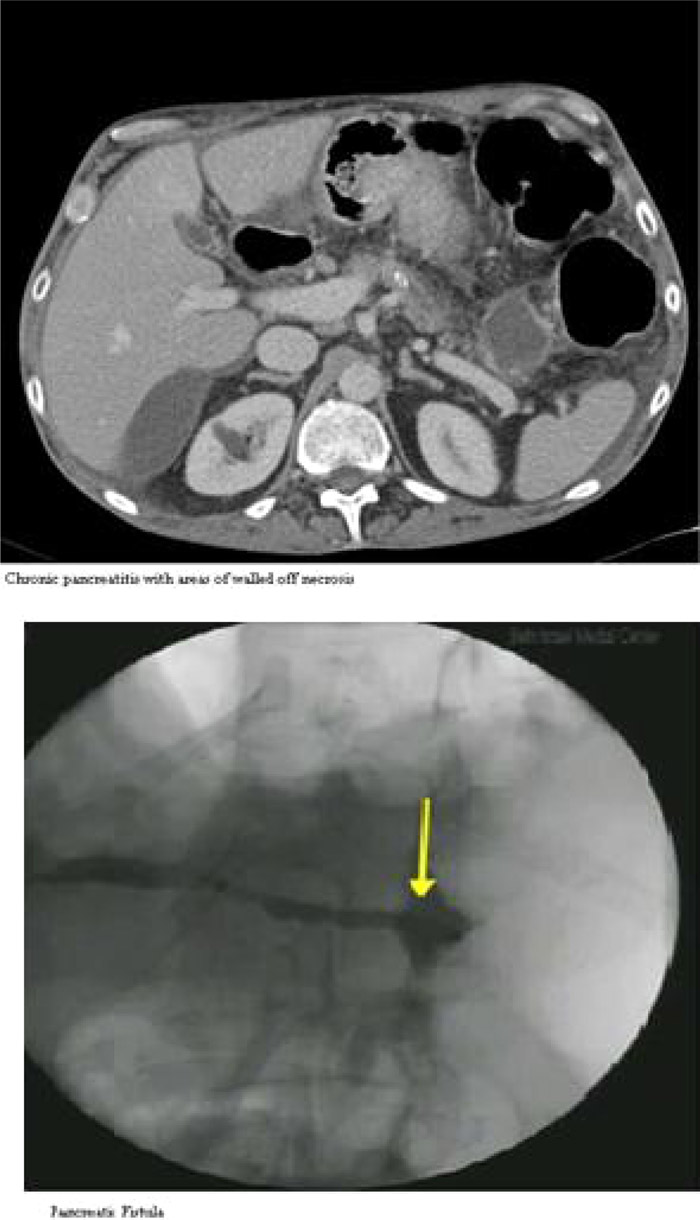