Ovarian hyperstimulation syndrome (OHSS) is a complication of exogenous gonadotropin stimulation, used in infertility cases. Most cases are mild and self‐limited, but occasionally they can become severe and require hospitalization. A 31‐year‐old woman with a medical history only of infertility was receiving exogenous go‐nadotropins. She was seen in an infertility clinic 3 days prior to admission where she complained of abdominal pain and exertional dyspnea. She was sent home with instructions. Two days later she presented to the emergency room for chest pain and dyspnea at rest. She spoke in 3‐word phrases with a respiratory rate of 22. She was tachycardic to 110, with a blood pressure of 107/59 mm Hg. She had egophony with no breath sounds on the right lower lung field and mild to moderate ascites. Her labs were notable for blood urea nitrogen of 7 mg/dL which quickly rose to 28, creatinine of 0.57 mg/dL, alanine ami‐notransferase of 62 IU/L, beta–human chorionic gonadotropin (hCG) of 86 mU/mL, and hematocrit (Hct) of 55.8%. Chest x‐ray confirmed a large right pleural effusion (Fig. 1). Hospital medicine was consulted for fluid management and the tachypnea. She was given rapid intravenous (IV) fluids and started on 25% albumin IV every 8 hours. Deep vein thrombosis (DVT) prophylaxis was administered with subcutaneous heparin. Strict intake, output, and weight were measured daily. Lasix intravenously twice daily was started only after intravascular volume was repleted, and repeat labs showed Hct < 36%. The goal was to maintain urine output. Because of worsening oxygenation, a thoracentesis was performed, and 1.3 L of transudative fluid was removed. The patient's respiratory status progressively improved during the remainder of the hospital course. In addition, her beta‐hCG successively doubled, consistent with pregnancy. The patient continued to diurese, even after stopping Lasix and albumin. She was discharged home in good condition. 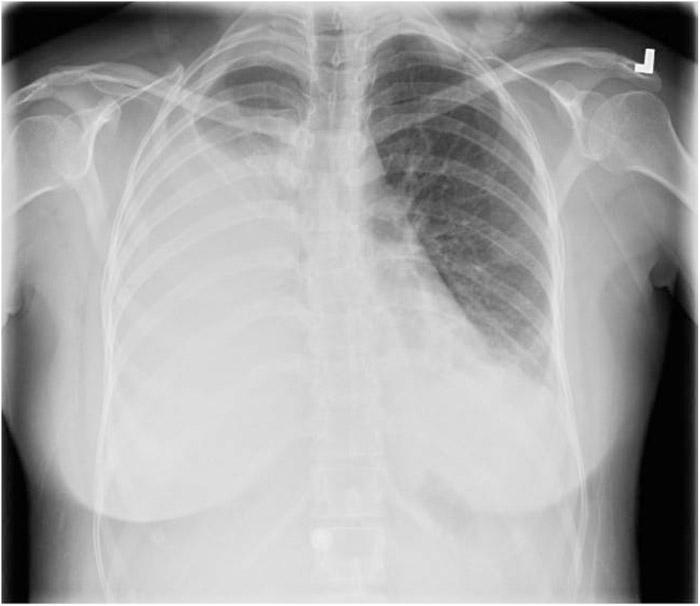 OHSS can be severe and require hospitalization. Patient risk factors include younger age, polycystic ovaries, high doses of gonadotropins, and previous OHSS. It results from a dramatic increase in capillary permeability, resulting in fluid shifts from the intravascular to third spaces, leading to peritoneal ascites and hydrothorax. They often require intravenous fluids, albumin, close monitoring, and often paracentesis. There is a high incidence of thrombophlebitis or embolism, and patients should be placed on DVT thromboprophylaxis.

Hospitalists are being called to take care of patients from many different services. Doctors need to recognize this syndrome if they work in a center that prescribes ovulation‐inducing agents and know how to treat it.