The development of systems that optimize quality of care, reduce costs, and enhance safety is vital to patient care. The VA healthcare system utilizes 27 quality metrics which allow for institutions to assess their performance in these areas, referred to as Strategic Analytics for Improvement and Learning (SAIL). SAIL data includes performance reports regarding length of stay (LOS). For several years, the New Mexico VAMC (NMVAMC) has been in the fifth quintile for inpatient LOS, with an average of 5.5 days in 2015Q1. The national VAMC average was 4.6 days.  This ranked the NMVAMC 111 out of 130 VAMCs. The LOS Workgroup was developed and charged with performing an inpatient deep dive into patient charts to determine the primary causes of increased LOS, as well as implementing plans for improvement.

The NMVAMC LOS Workgroup reviewed the charts of 150 hospitalized patients between January 2015 and March 2015 flagged as having LOS above their Diagnosis Related Group (DRG) expected LOS.  First, a determination was made regarding whether or not the patients had a medical reason for continued hospitalization. If they did, no further investigation was performed.  If patients had non-medical reasons for continued hospitalization, physician and social work daily notes were reviewed to identify causes.  Once the causes were identified, the workgroup compiled a list of preliminary recommendations which were presented to administration and approved for implementation. The implementation period occurred from June 2015 to February 2016.

Between January and March 2015, 150 patients were flagged as having LOS above their expected DRG.  The LOS for these patients ranged from 3.2 days to 32 days.  Average length of stay during that time was 5.5 days. Of these 150 patients, 80 had no medical reason for continued hospitalization. The causes that contributed most to increased LOS were skilled nursing home (SNF) placement (23%), OR delays (21%), weekends/holidays (14%), and procedures (13%).  Eighteen systems changes were identified and 13 were implemented. By February 2016, the average LOS decreased to 4.5 days, improving NMVAMC ranking to 54 out of 130 VAMCs.

As of April 2015, the NMVAMC was in the fifth quintile compared to other VAMCs based on the SAIL LOS metric.  Following the initial deep dive, multiple changes were implemented that significantly reduced our average LOS for hospitalized patients with non-medical reasons, moving our performance into the top of the third quintile. A second deep dive was performed between March and May 2016 to further identify causes of increased LOS.  Continuing this deep dive process is vital to identifying the causes of LOS in a complex hospital system.  Though labor intensive, this novel approach to evaluating LOS identified issues not found by examining DRG codes alone.  This approach should be considered by hospitals to reduce the LOS. 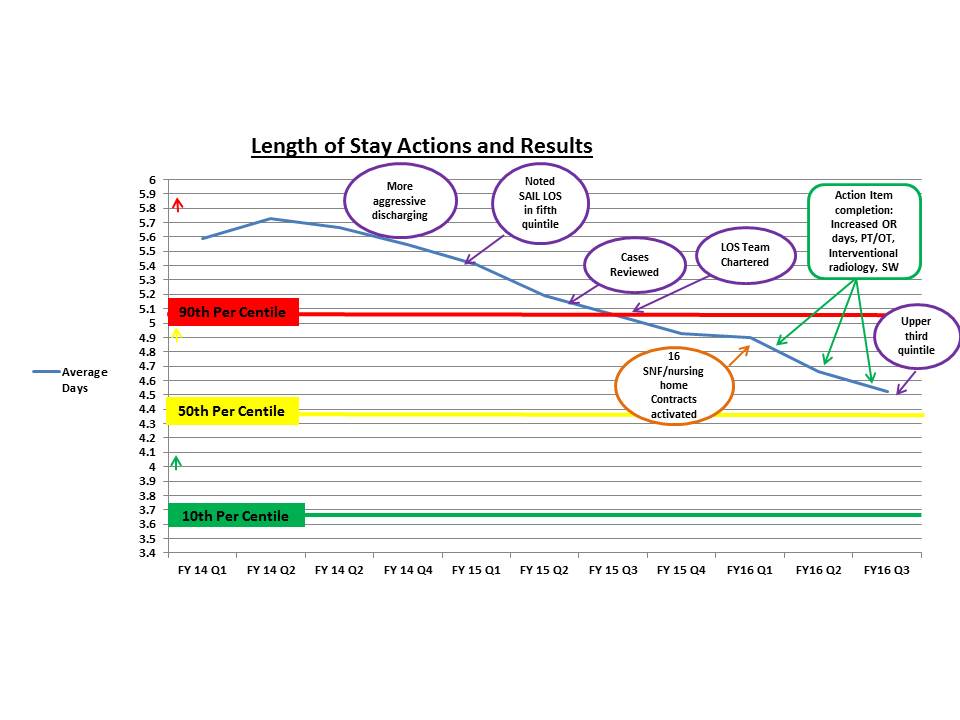