A 55‐year‐old woman presented with acute onset of chest pain at rest that radiated to her jaw and left arm. Her medical history was notable for hypertension, hyperlipidemia, OSA, and obesity status post gastric bypass surgery 10 years ago. Family history is noncontributory. On examination, vital signs were stable. Her systemic examination was unremarkable. EKG showed T‐wave inversion in lead II, without ST‐segment changes. After the administration of sublingual nitroglycerin, her chest pain was substantially reduced. Troponin T levels were positive at 0.106. The rest of his laboratory results were significant for anemia (hemoglobin of 7.1 and hematocrit of 21.3%). On subsequent coronary angiography, the patient was noted to have a 1.8‐cm saccular aneurysm that involved the distal portion of the left main (LM) coronary artery and extended into the origin of left anterior descending (LAD) and left circumflex (LCx) coronary arteries, with no significant coronary stenoses. EF was 60% with no regional wall motion abnormalities. Aspirin therapy was started, but warfarin was withheld due to the patient's reported history of melena and suspected recurrent upper gastrointestinal bleeding. She was given blood transfusion. Emergent EGD followed by capsule enteroscopy revealed an isolated discrete AVM in proximal small bowel without evidence of active bleeding. Later, noted no bleeding recurrence and she remained asymptomatic. Medical treatment for the LM coronary artery aneurysm was considered and was maintained on aspirin 81 mg daily. However, on discharge, she was given appointment to follow up in the cardiology clinic with the consideration to address either more intensive medical therapy or possibly a surgical procedure if her symptoms recur or continuous enlargement of the aneurysm will be noticed through serial angiographic evaluations.

The majority of coronary artery aneurysms are atherosclerotic in origin. Other causes may include congenital malformation, SLE, Marfan syndrome, and idiopathic. Clinically, most aneurysms are silent. The primary complication is myocardial ischemia or infarction as noted in our case, likely secondary to the abnormal flow within the aneurysm which predisposes patients to thrombus formation within the aneurysm and distal embolization, even in the absence of obstructive coronary disease as in our case where we expect the aneurysm was a rare congenital malformation. LM coronary artery aneurysms can be effectively managed either operatively (ligation of the aneurysm and revascularization with coronary artery bypass grafting) or medically (adequate anticoagulation and antiplatelet therapy).

Aneurysm of the left main (LM) coronary artery is exceedingly rare condition. Thrombosis within the aneurysm can lead to distal embolization and myocardial infarction. This case emphasizes the importance of early detection and treatment options for this condition. 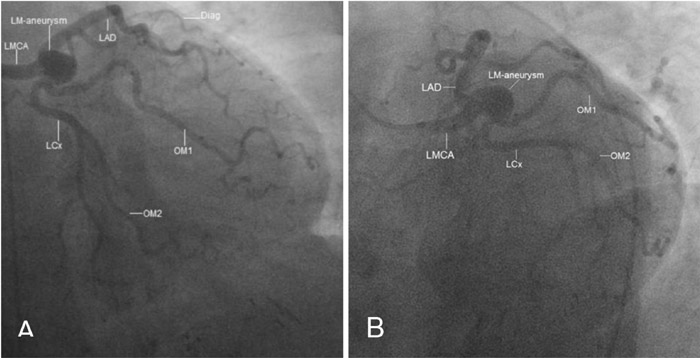