Case Presentation: A 77 year old female who had a diagnosed primary gastric adenocarcinoma at another hospital presented to the emergency department with shortness of breath. A chest x-ray was done which showed a large left-sided pleural effusion (Figure 1). An ultrasoundguided thoracentesis was done and the pleura was positive for metastatic adenocarcinoma, however the pathology revealed that the sample was a primary lung carcinoma. As such there was a question to whether or not this is two separate primary cancers, pure metastatic gastric cancer, or pure metastatic lung cancer. The patient had a pleural/diaphragm biopsy showing primary lung adenocarcinoma. Also, the patient had an esophogastroduodenoscopy done displaying a gastric mass (Figure 2). Biopsy was done showing metastatic lung adenocarcinoma. Further testing revealed that patient had epidermal growth factor receptor (EGFR) deletion 19 and programmed death-ligand 1 (PD-L1) positive. Patient was started on erotinib and has tolerated the treatment well.

Discussion: Primary lung cancer contributes to 17% of newly diagnosed cancer cases and 23% of total cancer related mortalities [1]. Half the patients have metastatic disease at time of diagnosis with survival rates of 20% at one year and 1% at five years [2,3]. Normally, primary lung cancer metastasizes to the liver, bones, adrenal glands, and central nervous system. Gastric metastasis from lung cancer has a reported incidence 0.2% to 0.5% at necropsy [4.5]. Although rare, this idea must not escape the clinician’s mind.

Our patient came in with the reported diagnosis of primary gastric adenocarcinoma. She was in the process of evaluation for feeding tube and palliative care treatment. Fortunately, she developed a malignant pleural effusion requiring her to come to the hospital. This brought up three possibilities: both of the areas are actually metastatic gastric cancer and our hospital’s pathology department made a mistake in diagnosis; there are two separate primary cancers (gastric and lung); or the patient has lung cancer at both sites and her previous diagnosis of gastric adenocarcinoma was wrong.

On endoscopy, the gastric mass looked impressive (Figure 2). Although it appeared large, confirmatory diagnosis must be made by biopsy and histopathological examination.  We used TTF-1, CK7, and CK20 to distinguish the mass as a lung adenocarcinoma metastasis. TTF-1 is highly specific for adenocarcinomas of pulmonaryorigin exhibiting a positive predictive value of 100% [7]. In addition primary lung carcinomas usually express the immunophenotype of CK7+/CK20-, whereas gastrointestinal carcinomas have the CK7-/CK20+ pattern [7]. Our patient was TTF-1 positive, CK7+/CK20-.

The tumor tissue must be assessed for the presences of a driver mutation that stimulates tumor growth [8]. Our patient was epidermal growth factor receptor (EGFR) positive, and meta-analysis has shown that EGFR tyrosine kinase inhibitors (TKI) significantly prolong survival in patients with advanced non-small cell lung cancer[9].

Conclusions: Primary lung cancer metastasizing to the stomach may not be seen frequently. Comprehensive initial history must always question patient reported disease. History and physical with advanced laboratory techniques will aid in the final diagnosis and management. EGFR TKI therapy is the treatment of choice for EGFR mutation positive lung adenocarcinoma. PD-1/PD-LI therapy can be an option in appropriate patients. 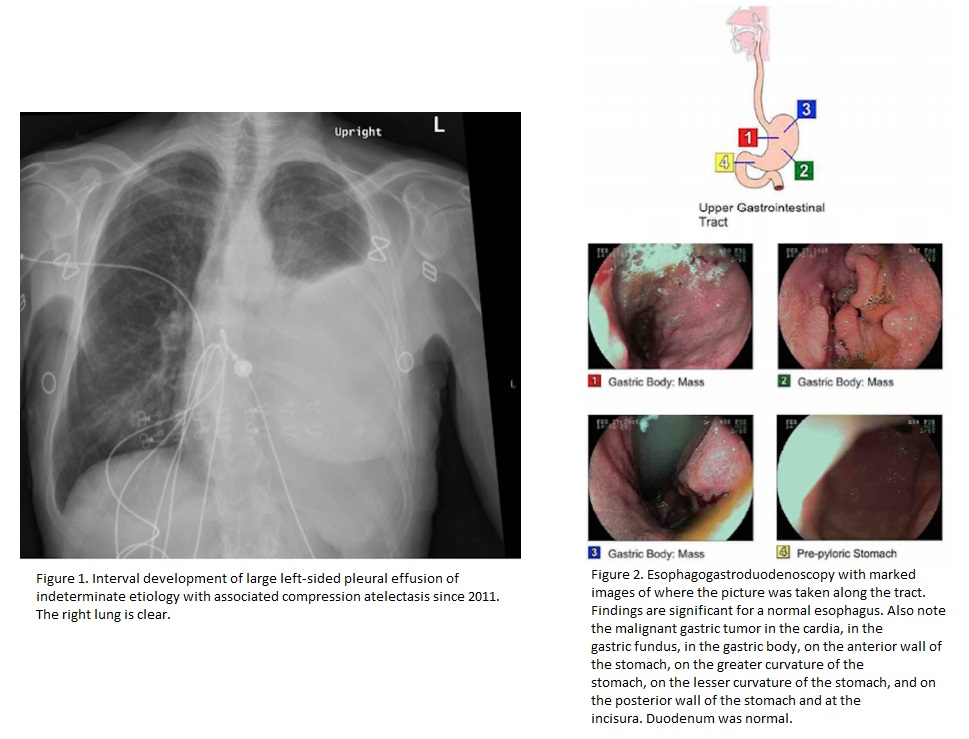