A 46 year-old man presented with one week of headache and shortness of breath. He also reported generalized fatigue, productive cough, and 40 lb weight loss. There were no sick contacts and review of systems was otherwise negative. He had been diagnosed with thymoma and myasthenia gravis six months prior to admission, at which time he underwent thymectomy with positive margins. He was initially on high dose steroids, which were tapered off one week prior to admission.

He appeared unwell with rigors, temperature of 38.7C and HR 100 beats/minute. He had anisocoria, diffuse crackles in both lungs, and a fluctuant mass in the left anterior thigh. No meningismus was noted and neurological exam was non-focal.

Further history revealed recent travel to the Philippines with possible exposure to tuberculosis.

Immunoglobulin levels were checked and patient was found to be hypogammaglobulinemic. He also had moderately reduced T lymphocytes and near absence of B lymphocytes in the peripheral blood. A diagnosis of Good syndrome was made.

His condition improved with anti-tubercular therapy and intravenous immunoglobulin (IVIG).

Sepsis is a common diagnosis encountered by hospitalists. When atypical organisms cause sepsis or severe disseminated disease, careful thought must be put into determining factors that make a patient susceptible to unusual scope or severity of infection. Initially, our patient’s recent exposure to high-dose steroids was considered as an explanation for his disseminated disease. But recognizing the association between thymoma and immunodeficiency was crucial in diagnosing Good syndrome, which has critical therapeutic implications.

Good syndrome is a rare association of thymoma and immunodeficiency. Patients are typically between the ages of 40-70, have a thymoma, low B cells in peripheral blood, hypogammaglobulinemia and defects in cell-mediated immunity. These patients have increased susceptibility to bacterial infections with encapsulated organisms and other opportunistic infections. Recognition of this syndrome has important therapeutic implications, as IVIG therapy is usually required along with antimicrobials.

This case highlights the importance of thorough consideration of risk factors in a patient with atypical infection or severe disseminated infection. Physicians should recognize the association of thymoma and immunodeficiency, as it is the key in identifying patients with Good syndrome. 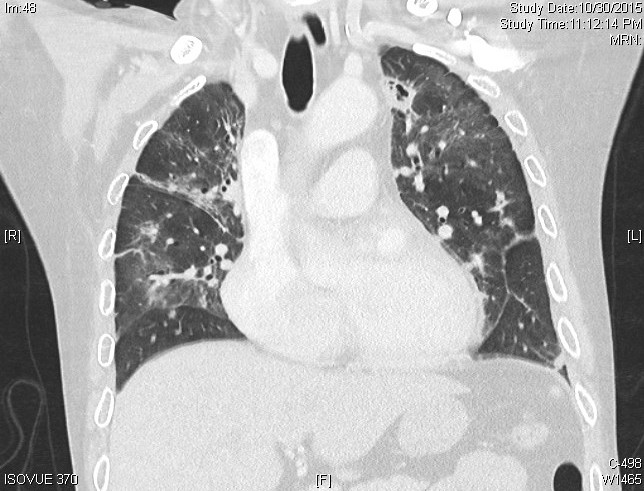