A 31 year old Caucasian female, with a history of cyclical vomiting presented with abdominal pain and intractable nausea and vomiting for 4 days. Abdominal pain was 10/10 in severity, diffuse, pressure type, non-radiating, worse with food intake.  She had 25 episodes of vomiting, non-bilious emesis with food particles. She had participated in a body sculpting competition 5 days prior to her presentation. In preparation for her competition the patient was on a strict diet and intentionally lost over 25 lbs in 16 weeks. On admission her urine pregnancy test was negative. Further investigations included XR abdomen that showed mild gastric distention, organomegaly or soft tissue process in the upper quadrants.  A CT abdomen/pelvis with contrast showed marked dilatation of the 2nd and proximal 3rd part of the duodenum with the level of obstruction between the SMA and the aorta, suggestive of SMA syndrome.

The SMA is an anterior branch of the abdominal aorta. The angle between the SMA and the aorta is between 38 and 65º.  The 3rd portion of the duodenum passes between the SMA and aorta. The fatty and lymphatic tissue that envelops SMA extends at an acute angle into the mesentery. The normal aorto-mesenteric distance is between 10 to 28 millimeters (mm). Narrowing of the angle to <6º with the aorto-mesenteric distances as low as 2 mm can potentially lead to duodenal compression. The most common risk factor is significant weight loss leading to mesenteric fat pad loss as observed in this case. Other risk factors include prolonged bed rest, malignancy, malabsorption syndromes, trauma, burns, and spinal cord injury.  Differential diagnosis include other mechanical causes of small bowel obstruction and diseases associated with duodenal dysmotility that include diabetes mellitus, scleroderma, and collagen vascular diseases. An initial work up includes plain abdominal films, CT, MRI of the abdomen with contrast, and arteriography if diagnosis remains unclear. Conservative therapy includes GI decompression, electrolytes correction, and nutrition through nasojejunal tube feeds. Surgical options include: Strong’s procedure-repositioning of duodenum, gastrojejunostomy, and duodenojejunostomy with or without division/resection of the 4th part of the duodenum.

Usually proximal intestinal obstruction typically presents as nausea and vomiting responding to conservative measures. A relatively rare cause of proximal intestinal obstruction is the superior mesenteric artery (SMA) syndrome, a potentially life-threatening gastro-vascular disorder that requires a high index of suspicion. The importance of this case is the diagnosis is often delayed due to nonspecific complaints and may result in significant complications due to electrolyte abnormalities, gastric perforations, and gastric pneumatosis. 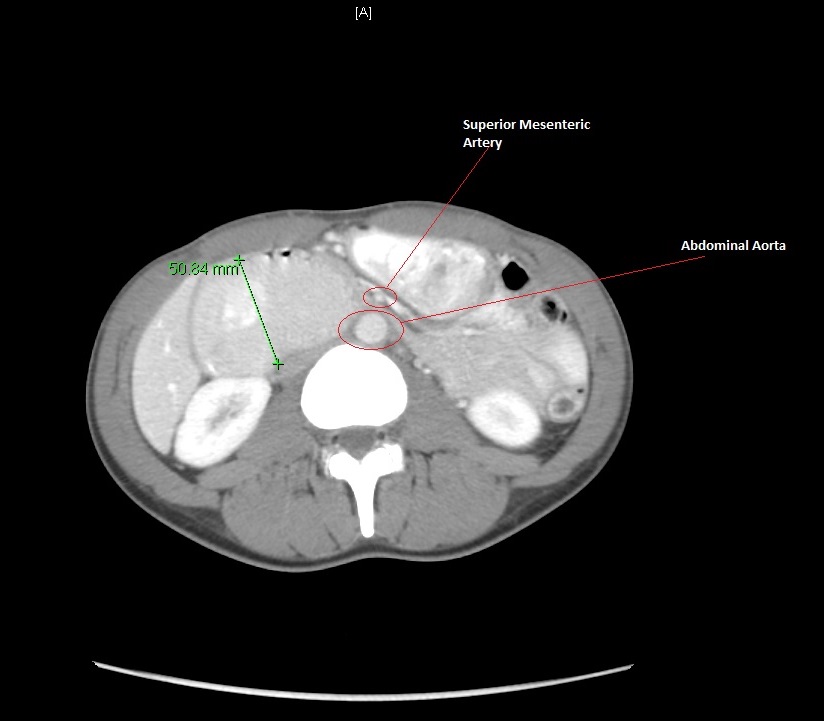