A 28‐year‐old woman with a medical history of asthma, migraine, depression, and smoking presented to the emergency department (ED) with shortness of breath and cough fora month. She had previously been treated by another ED with oral steroids without any significant relief. A CXR done this time revealed a diffuse reticular nodular pattern of interstitial markings suggestive of atypical pneumonia. A course of appropriate antibiotics also failed to improve symptoms. A CT of the chest (see Fig. 1) showed numerous cavitated nodules of varying sizes scattered throughout both lungs in the upper and lower lobes with mildly enlarged hilar and mediastinal lymph nodes. A BAL did not reveal any organisms and was negative for malignant cells. A transbronchial biopsy showed no significant pathologic findings. An open lung biopsy showed Langerhans cells with characteristic staining for S‐100 protein (see Fig. 2) — diagnostic of primary pulmonary Langerhans cell histiocytosis (PLCH). A further survey of her bones revealed no bone involvement. 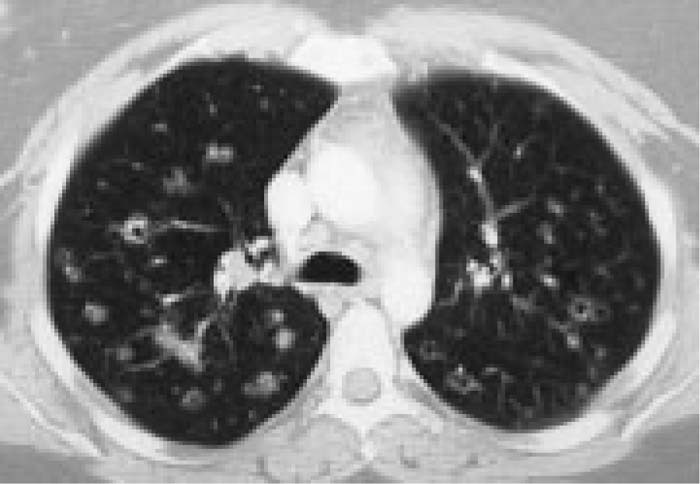 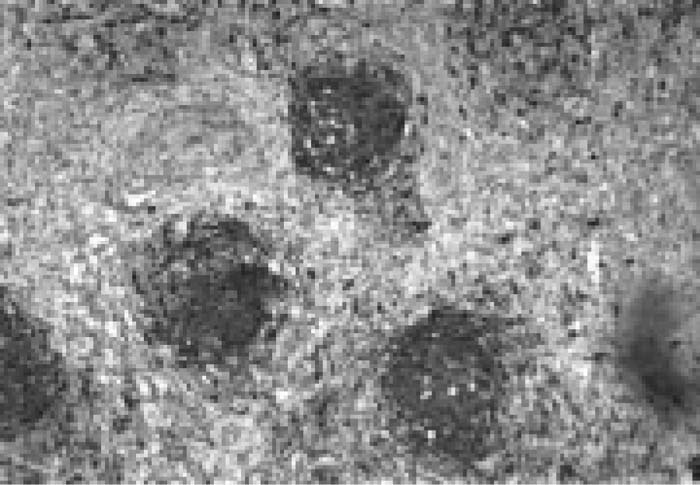 PLCH or eosinophilic granuloma or pulmonary histiocytosis X is an uncommon interstitial lung disease that primarily affects young adults between 20 and 40 years of age with an equal sex distribution. Although, no occupational or geographic predisposition is known, there is a near‐universal association of PLCH with cigarette smoking. Patients mostly present with respiratory or constitutional symptoms, although the diagnosis is often made when abnormalities are incidentally detected on chest radiographs or following a spontaneous pneumothorax. The term eosinophilic granuloma is a misnomer, as the peripheral eosinophil count is normal, and the lesions are also devoid of eosinophils. Radiology reveals predominance of the disease in the mid to upper zones of the lung. Cessation of smoking is the mainstay of therapy. Other modalities include cortico‐steroids, cytotoxic agents (etoposide, VP‐16, LCH‐1), lung transplantation, and radiotherapy for symptomatic bone lesions.

This case illustrates how a common presentation can sometimes lead to a rare diagnosis. The practice of hospital medicine faces the challenge of reducing costs and shortening patients' hospital stay. It is important to realize that common things happen commonly. However, recognizing when the picture does not fit is prudent. PLCH should be considered in young smokers who present with interstitial lung disease of unknown etiology.