In 2007, the British Department of Health developed guidelines for health care workers regarding uniforms and work wear that banned the traditional white coat, long sleeves, jewelry, and neckties in the United Kingdom. To date, no studies have assessed whether physician white coats are more heavily contaminated by bacteria than newly cleaned physician uniforms.

We randomly assigned 100 available internal medicine physicians to either continue wearing their own white coats or to exchange them for a newly laundered standardized uniform (scrubs). Rodac plates were used lo obtain cultures from the sleeve, cuff, and wrist of the dominant hand and the breast pocket of all participants. Cultures were then incubated at 35°C‐37°C for 18–24 hours, and colony‐forming units were counted. Colonies morphologically consistent with Staphylococcus species underwent Staph latex agglutination testing (Remel). If positive, colonies were subcultured to blood agar and BBL CHROMagar MRSA for the confirmation of methicillin‐resistant Stapbylococcus aureus (MRSA). Ten subjects wearing scrubs also had cultures obtained at 2.5, 5, and 8 hours, with each sample obtained on different days. Mean colony counts were compared using the Student t test or paired t test (for timed studies). Bonferroni corrections were used for multiple comparisons such that P < 0.0125 was considered significant. The proportions of subjects' white coats or scrubs that were contaminated with MRSA were compared using chi‐square analysis and repeated‐measures logistic regression. The Colorado Multiple Institutional Review Board approved this study.

No statistically significant differences were observed between the mean number of colonies cultured from any of the 3 sites or for the proportion contaminated with MRSA for either dress (Table 1). Nearly 50% of the colonies counted at 8 hours were present 3 hours after donning newly laundered scrubs (Fig. 1). 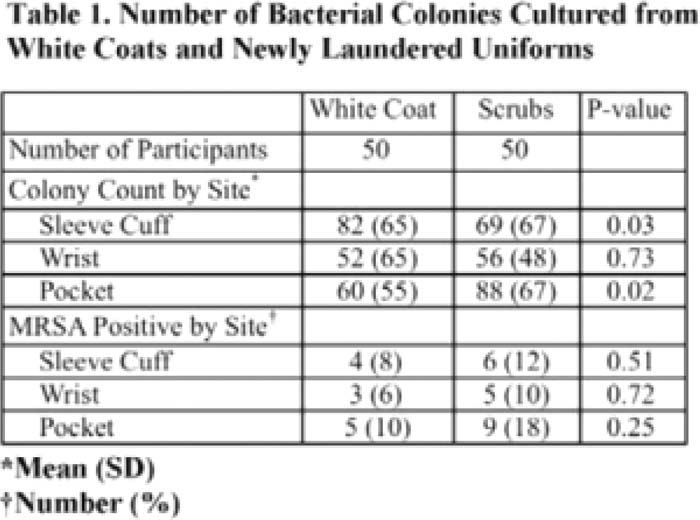