Background: Chemoprophylaxis with subcutaneous heparin or low-molecular weight heparin is recommended for venous thromboembolism (VTE) prevention in appropriate medical patients.  However, all doses are not always administered and the consequences are unclear.  We sought to determine if there is a relationship between missed and/or refused doses and development of in-hospital VTEs.

Methods: The study is a retrospective analysis of patients discharged from general medicine units at an 800-bed urban tertiary referral center and an affiliated 200-bed suburban hospital from January 1, 2014 through August 10, 2016.  Patients with a length of stay of at least 2 days were included in the analysis.  Chemoprophylaxis doses were subcutaneous heparin 5000 units twice or three times daily and subcutaneous enoxaparin 40 mg or 30 mg daily.  Doses that the patient did not received were categorized as either refused, which required explicit documentation of refusal, or missed.  In-hospital VTE events were identified by a validated diagnosis algorithm using medication administration records and problem list documentation within the electronic health record.  Patients with VTE receiving anticoagulation at time of presentation or within the first 24 hours of hospitalization were also excluded. Baseline VTE risk was calculated using the IMPROVE risk assessment model where scores of >1 represent high risk, which includes age >60 years (1), active cancer (1), prior VTE (2), and hypercoagulable condition (2).  Other potential VTE risk factors of length of stay and central venous catheters, including peripherally inserted central catheters, were also evaluated.  Univariate and multivariate regression analyses were performed using SAS.

Results: 460 in-hospital VTE events occurred in 32,358 hospitalizations (1.42%).  51.3% received all doses, 23.7% only refused, and 25.0% missed a dose for any other reason. In univariate analysis, patients with any missed heparin or enoxaparin had higher odds of VTE than those who received all doses (1.73, 95% CI 1.43-2.10), and those who only refused had lower odds (0.26, 95% CI 0.18-0.39).  The relationship between chemoprophylaxis administration and outcomes persisted across the spectrum of IMPROVE scores (Figure 1).  On multivariate analysis, including the additional risk factors, the odds of VTE with missed doses was no longer significant, however, the significance remained for refused (Table 1).

Conclusions: Administration of prescribed VTE chemoprophylaxis is an important step in VTE prevention, however patient who missed at least one dose during their hospitalization did not have a higher incidence of in-hospital VTE, when adjusted for risk factors, while patients who only refused doses were actually at a significantly lower risk.  The mechanism for lower VTE rates in refusal patient remains unclear. 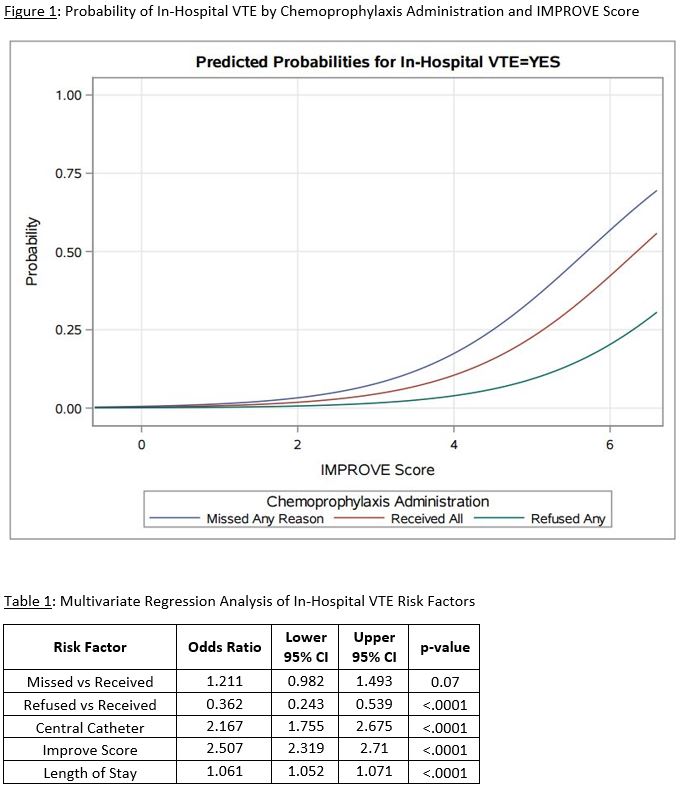